Blaise End is the 18th level in Dungeon Keeper.

In Blaise End, the Keeper is tasked with destroying the large and heavily-defended fortress built by the Heroes of this land. Even approaching the place is dangerous; there are ambushes and traps secreted throughout the region, and troops will be pouring in from the surface.

"Grueling" may be the word that describes this realm best. It is Viscount Lamport[1] and his minions' doing.

There is a large number of Heroes in residence and an absurd number of squads waiting to back them up in various circumstances. But what do you expect? This is Level 18 of 20.

A hidden counter is monitoring the Gold Seams on the map and counting how much gold is extracted. Note that a Gold tile contains 1024 gold. Selling items like Doors, Traps, and Room slabs, or hauling Gold Pots to the Treasure Room, does not count. The player is counseled that the Heroes are "asleep" at the moment. Mining is what wakes them up, or at least the first few groups.

2 - carrying 1950 gold
When the Keeper has mined 15,000 gold, this group is released from a hidden Hero Gate, nearer-northeast.

6 - 500 gold each
These Archers ambush the first creature to enter the White-owned Hatchery on the west side of the map.

8 - 500 gold each
These Thieves leap into action when the player enters a White-owned chamber on the east side of the map, just off the Bile Demons' prison. Do not underestimate the attack rating of high-level Thieves, or their personal Invisibility spells! The first time you see them might be when they are pounding away at your Dungeon Heart.

6 - 500 gold each
These defenders crash in at places all around the Lava, as the Keeper first approaches the White Dungeon.

7 - 6000 gold
A Braced Door tucked into the White Dungeon's outer wall, along the west exterior path to the Reveal Map special, holds behind it a few trap designs. 200 Turns after the Keeper sights this door, a copy of this party lands at its location and attacks.

8 - 500 gold each
Beyond another Braced Door, a pack of dangerous Wizards ambushes the player on the approach to the Reveal Map special.

4 - holding 500 gold each
Along the opposite east exterior path around the fortress, past a series of Boulder Traps, these Archers wait in ambush.

4 - 1700 gold
An instance of this basic party is supposed to respawn every 2500 Turns at the front door of the White Dungeon, from the moment the Keeper first approaches the White Dungeon until the White Heart is destroyed, disrupting the player's exploitation of the huge Gem cluster near there. Pointlessly, the script's caller is a nonexistent Green Keeper (PLAYER2). The spawn does not appear to work at all.

8 - 500 gold each
A final ambush on the path to the White Dungeon Heart, centered around a Resurrect Creature

The portal in Blaise End is like a slow drip that never stops. To reach the Creature Limit, it will generate creatures for 45 minutes straight. Regulate which creatures get in with a careful expansion schedule and restricted

Lair space. There is surely not enough gold in the lower half of the map to pay 60 creatures' wages, or training for even a small fraction of that. The swarm of

Dragons in the Creature Pool, in particular, seem like a financial death trap here.

One can also approach the Hero Parties with a managerial attitude. Monitor the

Imps' activity throughout the region, both in mining and in claiming territory, to get only enough enemy activity that you can handle at a time. To pull Imps completely out of action for a while, drop them into the walled-off dirt in the dead center of the map, with that Portal, to idle and heal. Bullfrog Productions rewards a certain amount of bravery on this map. The Heroes here have tens upon tens of thousands of gold, which can be yours if you let them attack, rather than wall-off and try to live off your

Magic Door, and a

Briefing Text
"The guardians of this realm are asleep at the moment. Attack them as soon as you can or they'll be breakfasted, wide awake and inherently more difficult to slaughter."

Player mines 12,000 gold
"If you should encounter hero patrols, ensure that none of their number escape. Otherwise your presence will be revealed and then you will be in trouble."

Player has mined 35,000 gold, and White runs out of Mountain Dwarves
"You're taking forever over this. Attack and destroy the heroes' stronghold soon, preferably before hell freezes over."

10,000 Turns after the player has reached White Dungeon's front door
"Enemy reinforcements have arrived. So what? Let's hear it for more killing." 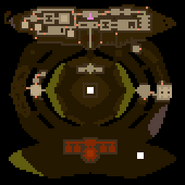 Blaise End as it was in a prototype. It bears a striking resemblance to Morkardar 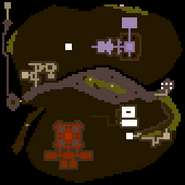 The map of that prototype version.

Mistle in a prototype. It looks like Blaise End
Add a photo to this gallery

Retrieved from "https://dungeonkeeper.fandom.com/wiki/Blaise_End?oldid=14338"
Community content is available under CC-BY-SA unless otherwise noted.