Buffy Oak is the 13th level in Dungeon Keeper. This realm pits the player against two allied Keepers. There is great wealth on this map, and such a large bin of creatures and research available to all sides that the battles will be glorious.

At a glance, the Red Dungeon's geography is impressive. The portals open up into disputed territory, however, and as long as the computer players hold the south shore, their bridges and greedy

Imps will creep across periodically.

Bard Barrie is the leader of this realm,[1] although there are no Heroes on this level.

Portal - north of Blue Heart
(Green owns its portal in the beginning, so it is not visible)

The Blue and Green Keepers have called a truce, and together they turn their efforts against Red. Almost as if he Transferred it in from somewhere, Green owns a Level 7

Bile Demons and Dragons in the creature pool, so if you decline to attract them, expect them.

Green almost always tunnels to Blue's Portal in a belated attempt to claim it (that Portal is neutral, after all), and their territories connect. As allies, they cannot claim one another's tiles. After carving out a

Training Room, and attracting around ten creatures, they tunnel north.

The enemy Keepers will be aiming to claim and hold the open shoreline south of the Red dungeon, and also appear interested in bridging to Red's portals (the only exposed points in Red's dungeon) and claiming them, too. When an enemy Imp is attacked, the offended AI plants a

Call to Arms and throws all available forces in.

The player begins in an already hollowed-out and fortified position. There are two portals, granting double the creature ingress rate, and all kinds of cash and tech for the taking. Red even has double the Creature Limit of Blue and Green. Finally, Red is the only side with eventual access to the Scavenger Room. Rather than stand around and gawk at all this good fortune, it's best to consider what sort of force you want to train and flesh out your dungeon quickly.

Despite the fully-exposed Gem Seam waiting for 12 full-time miners, training Imps is risky in this match, because the Gem is somewhat exposed to the exit of the Red dungeon and a likely site of battle. The Imps can be killed outright in the blast radius of Keeper

A Transferred minion from Elf's Dance or Secret 2 can blitz at least one of the enemy Keepers and wreak havoc (thanks to Green's dragon, Blue is more vulnerable). Alternatively, it can hold enemies off while you raise your army, and then lead your forays into the rival dungeons.

Fly and make a lap around the lava lake to claim the four neutral Dragons for your side.

It is possible to acquire the Increase Level and Reveal Map specials before enemies arrive. They both lie behind thin Gold seams, as shown in the gallery pictures below. Surrounded by

Poison Gas Trap, the Reveal Map is the more dangerous of the two to reach, though once the tile beneath it is claimed it can be popped right where it stands, and the traps can be left for an AI Keeper to deal with.

A Transfer Creature special is hiding deep in enemy territory, behind a fat Gold seam. It may be in one of the enemy libraries by the time you approach that area.

Briefing Text
"The other two Keepers in this region have put aside their differences for the moment and joined forces, in an effort to destroy you. That's almost a compliment. Kill the creeps."

Green and Blue Keepers destroyed
"You have won a magnificent victory, Master. You have a talent for twisted mercilessness that makes other Keepers look well behaved by comparison." 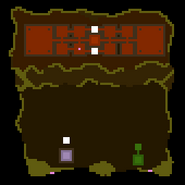 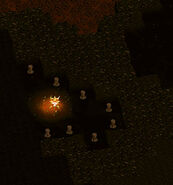 Reveal Map special, warded by Gas Traps
Add a photo to this gallery

Retrieved from "https://dungeonkeeper.fandom.com/wiki/Buffy_Oak?oldid=14391"
Community content is available under CC-BY-SA unless otherwise noted.