Chicken Arrow is an unused but still functional Creature Spell in Dungeon Keeper 2. The spell itself is not available ingame, and has to be added to a Creature using the Dungeon Keeper 2 Editor. When cast, it fires a live chicken in a straight line, which explodes into a shower of blood when it makes contact with anything.

It is unknown why this spell was cut from the final game, and it must have been cut close to the release date, as the spell is fully functional. 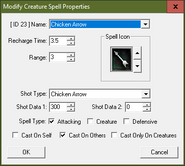 The unused Chicken Arrow spell in the Dungeon Keeper 2 Editor.
Add a photo to this gallery

Retrieved from "https://dungeonkeeper.fandom.com/wiki/Chicken_Arrow?oldid=13140"
Community content is available under CC-BY-SA unless otherwise noted.