Cosyton is the second level in Dungeon Keeper.

The objective in Cosyton is to build a dungeon and defend it from invading Heroes. Their liege, the Lord of The Land (Sheriff Dene[1]), must be killed.

Training Room for creatures may be constructed here, and it attracts

Demon Spawn. There are a few more Heroes on the prowl than there were in Eversmile, but Demon Spawn are easily their match.

1 - 700 gold
This is one of the two tiny parties to enter the map initially, on the East end. Their trigger is discussed in the next section.

1 - 200 gold
This is the other tiny party to enter the map initially.

1 - 900 gold
As soon as the first heroes are all slain, this group enters through a Hero Gate. The gate is situated in a white dungeon/shrine at the south end.

1 - 2000 Gold
Appears right away at the south Hero Gate when the "ELITE" party is slain.

Knight's Strength and Armour ratings are set to 40 and 50, respectively — stronger than in the previous level but still just half of what they should be. The maximum level of Knights,

Mountain Dwarves is set to 2, so there is a theoretical (but unlikely) possibility that they will level up once when battling the Keeper's minions.

Mine the gold and build all the available rooms. Be sure to dig through the small southeastern gold seam and claim the

Treasure Room on the other side.

Eventually, Heroes appear and start probing around in search of a weak spot in the dungeon walls. There is no real rush to prepare, because like in Eversmile, the Heroes only spawn after specific conditions are met. The trigger is 4000 Turns (~3½ minutes) after the Keeper has built a

Training Room, and in addition he must control at least two

Demon Spawn. Excavating first and delaying at least one room for a while can give the

Imps more time to fortify all the walls.

The best place to "allow" a breach is directly into the Training Room, forcing invaders to march head-on into a pack of hungry demons.

This realm has a string of messages concerning the new room on the block, the Training Room.

Briefing Text
"Remember the lessons you learned in Brana Hauk. You must build a Treasure Room, a Lair and a Hatchery and you will need to claim a Portal. Build rooms in squares of at least nine tiles to increase the efficiency of the room."

Additional starting message
"Possess creatures by choosing the Possess spell from the Research Panel and left-clicking on the creature you want to control. Right-click to leave the creature again."

1000 Turns have elapsed
"When Imps have no other orders, they run around reinforcing your dungeon. Fortified walls keep out intruders. Rooms with reinforced walls make your creatures feel more at home and heroes more terrified."

Player owns Portal and 9+ tiles each of Treasure Room, Lair, and Hatchery
"You will need to make your creatures stronger. In a Training Room, your creatures can hone their fighting skills, gain new abilities and learn more powerful spells."
The Training Room is made available for construction. If this hasn't happened before 10,000 Turns, the first Payday, the map removes the 9+ tile requirement for some reason.

Player owns 9+ tiles of Training Room
"Your plan proceeds smoothly, keeper. Allow your Imps time to fortify the walls of your dungeon. This increases the efficiency of rooms and repels would-be invaders."
Flies and Beetles temporarily disabled at Portal. If this hasn't happened another 7000 Turns after the prior message, the map removes the 9+ tile requirement, as it did earlier.

Additional Training Room message
"The Training Room attracts ever more ferocious creatures, such as Demon Spawn. Build it and they will come."

Player attracts a Demon Spawn
"To train creatures, drop them in the Training Room. The number that occasionally appears above a creature's head indicates how much gold it has cost for that creature to train."

500 Turns after player has attracted a Demon Spawn
"You can train creatures more rapidly by slapping them as they work out in the Training Room."

After the Keeper has attracted 2 Demon Spawn, Flies and Beetles are re-enabled at the Portal.

4000 Turns after Training Room built, and player owns 2 or more Demon Spawn
"Heroes are already on their way. Make sure your creatures are well trained and ready for the attack. The heroes you will face in this realm are tougher than those you met beneath Brana Hauk."

The Lord of the Land is slain
"Harder the heroes may have been but they were obviously no match for your forces." 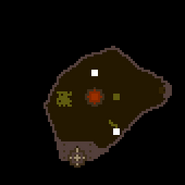 Keeper FX map
Add a photo to this gallery

Retrieved from "https://dungeonkeeper.fandom.com/wiki/Cosyton?oldid=13607"
Community content is available under CC-BY-SA unless otherwise noted.