Dungeon Keeper is a strategy video game developed by Bullfrog Productions under Peter Molyneux (also known for Theme Park, Black & White, and Fable) and released by Electronic Arts on June 26, 1997 for the PC. The game puts players in the rôle of an evil dungeon keeper, who recruits creatures to do his bidding and pit against goodly heroes and rival keepers.

The game was met with high critical praise and positive gamer reaction. An expansion pack, The Deeper Dungeons, was released on November 30, 1997. Around that time, a Premium version was released in Japan. A Gold Edition was released in North America and Europe the following year.[1] This was Molyneux's final project with Bullfrog before he left the company in July 1997 to form Lionhead Studios.

In the game the player attempts to build and manage a dungeon while protecting it from enemies (typically computer-controlled 'heroes' intent on stealing the user's accumulated treasures and causing your demise, but can also be the minions or rival Keepers). A game typically starts with a

Dungeon Heart (the dungeon's life force; if this is destroyed, you lose the game), some

Imps, some gold, and sometimes some rooms, and the player usually needs to construct the basic rooms (typically considered to be the

Training Room, and the

Library) and tunnel to a

Portal to attract creatures to his/her cause. Areas generally need to be dug out and claimed by Imps before rooms can be built there (Imps can also fortify walls to prevent breaches by hero

Creatures need resting in the Lair and nourishment via the Hatchery, and can be put in the Training Room to gain experience (and with it, abilities and increased stats, but doing so costs gold) or in the Library to research additional spells and rooms, such as the

Workshop (used to construct doors and traps) and

Torture Chamber (used to torture creatures to convert them to your side or to boost the speed and efficiency of creatures of the same type by inducing fear into them). Creatures can be slapped with the Hand of Evil to make them work faster, picked up and dropped elsewhere, or possessed by using the

Possess Creature spell, which allows you to take direct control of a minion, see the world from its perspective, and use its abilities.

Realms guarded by heroes often have a Lord of the Land, a

Knight who serves as the boss of the level as he is the strongest and usually the final hero (not necessarily the final enemy) encountered. He is often accompanied by a large party or multiple parties of heroes and you are usually required to defeat him to win. The ultimate hero of the original campaign and boss of the final level is the

Avatar, the strongest unit in the game.

Some levels feature Dungeon Specials to aid keepers in their quest. Neutral creatures can sometimes be found and will join the cause of the keeper who reaches them first, and spells can be obtained by retrieving loose spell books too (traps and doors can also be obtained this way).

Dungeon Keeper's development began in November 1994.[2] According to Molyneux, he came up with the idea while sitting in a traffic jam, and he hadn't noticed the traffic moving because he was too deep in his thoughts.[3] Lead programmer Simon Carter, however, said the idea "started with people at Bullfrog sitting down and messing with RPGs and stuff, and then thinking 'wouldn't it be more fun if you could play the evil guy?'".[4] The first version only had the ability to scroll around the map and enter third-person mode.[5]

Molyneux then developed a 2D top-down prototype, whose gameplay focused on constructing the dungeon and its rooms. The

Dungeon Heart were all in this prototype. The

Torture Chamber was implemented afterwards.[5] Development of a level editor began in May 1995, and by September, the

Possess Creature view had been developed.[2] A trailer was released in late 1995, and Bullfrog attempted to release a version by Christmas, but failed.[2] By around this time, the game was in a "playable stage", according to Carter.[4]

Another trailer was released in early 1996, showing aspects such as Mana and creature summoning. Around this time, dead creatures released their spirits. The goal of the game at this stage was to create a dungeon, and use gold and mana to summon creatures to guard the passageways or unleash on enemies when you have a large enough army.[6][7] Gold was dug by the player him/herself.[6]

Sometime afterwards, the development team decided it was too similar to Command & Conquer,[8] and "wouldn't cut mustard with the Bullfrog name" and lacked the "magic" that Populous and Magic Carpet had,[6] despite being "playable and graphically gorgeous".[6] The team moved out of Bullfrog's offices (Molyneux had decided to leave Bullfrog, so Electronic Arts wanted him to leave its offices[5]) and into Molyneux's house.[5] There, they fundamentally revamped the game. Out went the user interface, Mana, the idea of creatures being split into corporeal and magical categories, and summoning them with resources, and in came Claimed Tiles, Fortified Walls, attracting creatures through

Portals, and a brand new user interface.[6] The team played the game in their spare time, and argued about the correct victor based on how they thought the game should be against the way it actually was. The design was changed when someone won too easily.[5]

By early-mid 1997, the team were confident that the new Dungeon Keeper had everything, including a "brilliant" intro (storyboarded by Mark Healey and created by Darren Thomas[5]), "amazing" sound and music, "flash" graphics, and the "best" gameplay. Rooms now have multiple purposes, and there was potential for many new features. The game had 25 Creature Spells, 12 Traps (including a Fireball Trap), 16 Keeper Spells.[6] The game went into final testing in April.[2] There are two existing prototypes from this period, dated 21 May 1997 and 28 May 1997 respectively. Even at this late stage, there are still minor differences to the released game, indicating that the game was still undergoing changes. The final build is dated 13 June 1997, and the game was released later that month.

Dungeon Keeper received near universal positive reception. The humour, gameplay, and originality in particular were praised.

Computer Gaming World described the game as: "The most unique game in years".[12] These sentiments were echoed by Game Revolution and PC Zone, who described Dungeon Keeper as "revolutionary" and "classic" respectively.[16][19] Similar views were held by GameZilla, Edge, Génération 4, and PC Gamer.[9][14][18][10] Computer and Video Games believed Dungeon Keeper to be "totally awesome!".[13]

The humour was complimented by Next Generation and Computer Games Strategy Plus.[20][11] The audio was complimented by Gamezilla, who described it as "great".[9] Jeuxvideo.com liked the game's replayability and sounds.[17] Next Generation praised the addictiveness, and described the soundtrack as "dark and edgy".[20] Their views were shared by Jeuxvideo.com.[17] Computer and Video Games described the game as "too staggeringly detailed!" and the atmosphere as "masterly",[13] a view Edge concurred with.[14] Criticisms included an "occasionally weak" artificial intelligence from Next Generation,[20] and "repetitive" gameplay from PC Zone.[19]

Dungeon Keeper appeared on a The Guardian list of Britain's 30 greatest video games.[21] In June 1997, Dungeon Keeper was named as PC Gamer's Game Of The Month.[18] It appeared fourth on a list of top 100 games the following month.[22]

Back cover, North America and Oceania 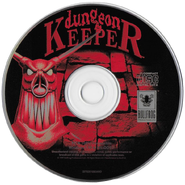 Game disc (UK)
Add a photo to this gallery

This article is a stub. You can help Dungeon Keeper Wiki by expanding it.
Retrieved from "https://dungeonkeeper.fandom.com/wiki/Dungeon_Keeper?oldid=13882"
Community content is available under CC-BY-SA unless otherwise noted.