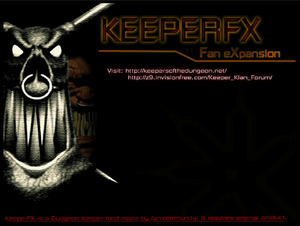 Dungeon Keeper FX, or simply KeeperFX (for Fan eXpansion), is a fan expansion of Dungeon Keeper. Amongst other things, it supports higher screen resolutions, fixes bugs (including the Level 10 Speed bug) adds new campaigns, and modifies the default creature stats. The latest official version is 0.4.6, but development has unofficially continued in KeeperFX Unofficial. The latest versions of KeeperFX Unofficial revives the atmospheric sound effects and an unused cutscene of the Lord of the Land being dragged to the bonus torture room.

This article is a stub. You can help Dungeon Keeper Wiki by expanding it.
Retrieved from "https://dungeonkeeper.fandom.com/wiki/Dungeon_Keeper_FX?oldid=11194"
Community content is available under CC-BY-SA unless otherwise noted.