The Dwarf is a Hero unit in Dungeon Keeper 2.

Dwarves are the Heroes' equivalent of Imps. They are weak fighters, and pose no challenge for creatures in a 1-on-1 fight, though a group of them can be troublesome for lower level creatures and can overwhelm them by sheer numbers.

Most keepers simply leave them to be tortured for information or left to rot in the Graveyard to attract Vampires.

Dwarves are the ones whom invade the dungeon via digging and can be annoying since they make holes in the dungeon making it easier for enemies to enter the dungeon, but useful if converted. Although they dig and are able to claim rooms and land, they cannot haste or teleport and demand wages (unlike imps) if you convert them.

If Converted they're useful in groups of 5 of more to overwhelm lesser creatures but their health is low and will fall unconscious rather quickly, in turn they level up very quickly in combat and when level 10, a group of them against weaker creatures can kill them.

They get scared very easily as a single skeleton makes them retreat but with a Guard, Giant or a Knight can make them bold enough to help in the fight 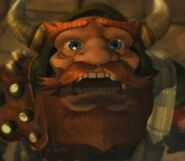 Retrieved from "https://dungeonkeeper.fandom.com/wiki/Dwarf?oldid=13102"
Community content is available under CC-BY-SA unless otherwise noted.