Elf's Dance is the 12th level in Dungeon Keeper. There are two rival Keepers here who are initially cordoned-off with locked doors and impenetrable rock. An enormous band of Level 1 Heroes holds the south end. This realm's Creature Pool has a wide variety of creatures weak and strong, and the dungeons' research and production trees are fairly comprehensive. There are Gem Seams for each Keeper as well.

For all that, the mission objective is simple: just kill everything.

Elf's Dance is ruled by Duke Darran,[1] but he doesn't put in an appearance here.

Iron Door, set in Impenetrable Rock and facing each other across the unclaimed central hallway, will open the way into the rival Keepers' domains if bashed.

These rival Keepers own the doors and have them locked. Since computer players will not unlock, sell, or bash their own doors, this means that the enemy teams are almost entirely sealed-off. Provided the player can keep his own creatures away from those doors (watch

Hounds), this is a safe realm in which to deliberately build up strength. The doors can be easily sealed off with the player's own locked doors.

Blue and Green are running identical, aggressive AI scripts. As time drags on they will frequently issue taunts over the intercom, throw

Call to Arms, and transplant it to Red's heart in an attempt to launch an invasion. As long as they remain sealed-off, nothing whatsoever comes of this gesture. If the doors are destroyed, prepare for battle.

Blue has a back-tunnel through the western gold seams into Red's territory, so eventually, he will attack. Laying

Lava Traps and bordering them with a

Guard Post will close off even this entrance, to all but flying creatures. The Green Keeper has no such option, and seems content to hole up in his cavern until the door dies. Neither Green nor Blue has the ability to build

Blue has ready access to 3 faces of a Gem slab, Green has 2, and Red has only 1 at the end of a long tunnel in the northeast end of the realm. Unless the AI breaks down — not out-of-the-question in the game's original release — all sides can sustain themselves indefinitely.

Both rivals can and will build

Scavenger Room, which puts the player in the annoying position of having to fend off attempts to steal his or her creatures. A possible strategy is converting all of the Heroes to the south, as they can't be scavenged without the rival Keepers having Heroes of their own.

Two huge bands of inept heroes patrol the southern caverns, and it's hard to miss the game's suggestion as to what their fate should be. There is a nice, big, free graveyard beyond them, outlined on the map by gold tiles. This region of the map also contains the Increase Level, Resurrect Creature, and Transfer Creature Specials (right, left, and upper-left respectively). However and whenever you choose to deal with the heroes, defeating them is required for victory, along with the enemy Keepers.

Briefing Text
"Powerful creatures inhabit a cave south of here. There's a party of heroes between you and them but, if you reach them and convert them to your side before they join the other keepers, you will be unstoppable, unless you do something stupid."

White, Blue, and Green destroyed
"You have overcome all resistance to your rule, O despicable one. It's time to flex the old misery muscle on the pathetic inhabitants of the land above." 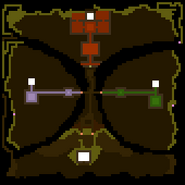 Revealed map with gem faces
Add a photo to this gallery

Retrieved from "https://dungeonkeeper.fandom.com/wiki/Elf%27s_Dance?oldid=14389"
Community content is available under CC-BY-SA unless otherwise noted.