Eversmile is the first level in Dungeon Keeper.

This level introduces the basic themes and devices of Dungeon Keeper such as room building and using the Hand of Evil. The objective in Eversmile is to build a dungeon and kill the Lord of The Land (Earl Ian[1]).

Just follow the in-game messages, starting either with construction of a

Treasure Room or mining out the Gold Seam adjacent to the Dungeon Heart.

Hatchery rooms are introduced on this level. The

Knight are the enemies encountered here. They drop in via a cave to the northwest after the Keeper's dungeon has been made ready.

This realm sends the player lots of tutorial messages at various stages to guide new players in the art of Dungeon Keeping. Initially only a Treasure Room may be constructed and only Flies can be attracted through the Portal.

The default Strength rating and Armour (damage reduction) of the

Tunneller dwarves have these stats slashed to 20.

20 Turns elapsed
"The first thing a Keeper needs is somewhere to keep gold, when it's been mined out of the rock by his imps. To create a Treasure Room, select the Treasure Room icon from the Rooms Panel and fill the empty area to the west with Treasure Room tiles."

125 Turns elapsed
"This is a message. Right click to delete it."

If ever player has lost all Imps
"You require more Imps. Use the Create Imp spell to conjure them into your domain. Remember, each Imp you create is more expensive than the last."

Player owns 1 or more Treasure Room tiles and at least 175 Turns elapsed
"Use the cursor keys to see other areas of the underworld. Rotate and zoom the view with the right ctrl key and cursor keys."

Player has mined 1000+ Gold and has a Treasure Room
"If you want to make your creatures work harder, slap them by right clicking the Hand of Evil on them. Slapping will harm your creatures."

Player has mined 5000+ Gold and has a Treasure Room
"Use the left mouse button to pluck your creatures from the dungeon. Use the right mouse button to drop them over a room or tile belonging to your dungeon. Creatures perform the task most relevant to the situation they're dropped into."

Player has mined 9000+ Gold and has a Treasure Room
"Greedily done, Keeper. Now, you need to turn some of your dungeon into a Lair. Lairs are where creatures rest and recover. The area your imps just mined out would be an ideal spot for some creatures to lurk. Select the Lair icon from the Rooms Panel."
Lair is made available for construction.

Player has begun mining Gold but has no Treasure Room
"You should build a Treasure Room first. Select the Treasure Room icon from the Rooms Panel and left click on the tiles in the area to the west of your Dungeon Heart."

Player has mined 1000+ Gold but has no Treasure Room
"Pick up creatures by left clicking on them. Drop them by right clicking over a room or tile belonging to your dungeon. Creatures perform tasks relevant to the situation they're dropped into."

Player has mined 5000+ Gold but has no Treasure Room
"If you want your creatures to work harder, slap them with a right click of the hand. Your creatures take damage from each slap they receive."

Player has mined 9000+ Gold but has no Treasure Room
"You have not yet built a Treasure Room. Until you build this room, you will be unable to pay any creatures. Only imps give their loyalty freely. No other creatures will serve you unpaid."

Player owns 9 or more Lair tiles
"Dig a tunnel that connects to the Portal to the north. Portals appear on the map as flashing squares, until they are claimed. Creatures only use Portals claimed by a Keeper. Your imps claim a Portal as soon as it connects to your dungeon."

Player has received the previous message and has attracted a Creature
"Your first minion has arrived. It's a giant Fly. It can spit corrosive vomit at your enemies and its wings grant the hideous insect the speed to intercept the most nimble trespassers."
The Beetle is enabled and the Fly temporarily disabled at Portal.

Player attracts a Beetle
"A Beetle has scuttled into your realm. It's tough enough to absorb a lot of damage. Like most creatures, Beetles require food. Dig out a new area, select the Hatchery icon and create your Hatchery. Tasty snacks will soon emerge from its enchanted soil."
The Fly is re-enabled at Portal. Hatchery is made available for construction.

Player owns 9 or more Hatchery tiles
"Imps fortify your walls to prevent intruders tunnelling in. If you want to create more imps, go to the Research Panel, select the Imp icon and left click anywhere in your dungeon. Each Imp you create costs more than the previous one."
Create Imp becomes available for casting.

600 Turns after Create Imp becomes available
"Why not have a handful of creatures ready to drop on top of intruders? To pick up creatures quickly, left click on them from within the Creatures Panel. You can only drop creatures within the confines of your own dungeon."

Player has 7+ Creatures, 800+ Turns after Create Imp becomes available
"Intruders approach. They seek gaps in your fortifications, in order to gain entry to your dungeon. A white trail on the map indicates their progress. Click the icon at the top of the Control Panel to see a bigger map."
Two Tunnellers added to level NW of Dungeon Heart.

Tunnellers are defeated
"Savour your first victory while you can. You have attracted the wrath of the Lord of this realm. His party will soon be here."

Player has 7+ Creatures, 500+ turns after Tunnellers defeated
"The Lord of the Land has arrived. I can smell his fear. Defeat him and the realm is yours."
Knight added to level NW of Dungeon Heart.

Knight is vanquished
"Your work here is done. Now there is no-one to prevent you from obliterating this nauseating realm and expanding your empire into a neighbouring land. Nice." 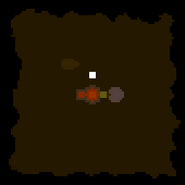 Keeper FX map
Add a photo to this gallery

Retrieved from "https://dungeonkeeper.fandom.com/wiki/Eversmile?oldid=13606"
Community content is available under CC-BY-SA unless otherwise noted.