Flowerhat is the 4th level in Dungeon Keeper.

In Flowerhat, the Keeper has to attack a dungeon owned by the Heroes of the land above. The goal is to destroy the White Dungeon Heart, an extremely durable object defended by a

Flowerhat introduces the concept and how-to of going on offense. It also reveals the existence of an inexhaustible source of Gold in the game, the Gem Seam, and a large number of other dungeon features.

For all the space needed to describe its content, it's still early in the game, and the level is simple. Before bridging the Lava to the north of the Red domain, build up a force of trained monsters, or use doors and traps defensively, as desired. There is unlimited mineral income here. Time isn't of the essence.

If the red (aggressive) Computer Assistant is turned on, it can usually win the level within a few hours.

Attack the White dungeon either by claiming territory and dropping creatures in when Heroes are encountered, or by casting

Call to Arms and battling your way through in one go.

1
Archers are camping the White entrance, across the lava moat from Red, two indoors and two out.

1   - carrying 400 gold
On entering White Dungeon, if the player's Creatures move down the corridor branching left, this party suddenly springs out from behind a Wooden Door, opposite to the Party "HERO3".

1   - 200 gold
On entering White Dungeon, if the player moves down the corridor branching right, two copies of this party suddenly spring out from behind the Wooden Doors facing each other.

1   - 200 gold
On entering White Dungeon, if the player moves down the corridor branching left, this party suddenly springs out from behind a Wooden Door, opposite to the Party "HERO1".

1   - 200 gold
Two copies of this party enter through a Hero Gate, along with "KNIGHT", when the player reaches the White Dungeon Heart.

3   - 20,000 gold
The Lord of the Land enters through a Hero Gate, alongside two copies of "HERO4", when the player reaches the White Dungeon Heart. But the game is not finished until the Heart is destroyed.

Call to Arms and

Heal, can now be researched and are useful in fulfilling the map objective.

Troll, a creature attracted by the Workshop. The Workshop allows the player to manufacture and place Traps and Doors to help secure the Dungeon against enemies. It is possible to manufacture the

Flowerhat is the first realm to include a Hero Dungeon Heart, and a new class of hero, the

Barbarian, makes an appearance. It is also the first realm to have Dungeon Specials: two Increase Level boxes, a Transfer Creature, and a Steal Hero. The first Increase Level can be accessed by making a bridge heading to the right of where the player first encounters Lava, on a small island. The second Increase Level and the Steal Hero are found in the small rooms at the beginning of the heroes' realm. The Transfer Creature Special is found in a cave set into (and outlined by) the impenetrable rock in the north, along with a new type of creature, the

Gem Seams are introduced in this Realm. They are a source of infinite wealth, never breaking like Gold Seams do. However, they are mined much more slowly than Gold. They can be found south of the player's Dungeon Heart.

Briefing Text
"Build up your dungeon with the rooms available to you and claim the Portal nearby but do not yet venture north. Powerful adversaries lurk there. It would be wiser not to disturb them until you are prepared."

Player owns Portal, Treasure, Lair, Hatchery, Training, & Library
"A study of dungeon designs reveals that Workshops manufacture essential furniture, such as Doors and Traps. If your Workshop occupies a square of at least nine tiles, its mere presence will lure the underworld's finest artisans into your dungeon."
The Workshop is made available.

9+ Workshop slabs
"To manufacture Traps and Doors in your Workshop you will need to assign creatures to it, by dropping them into the room. Manufactured items can be selected from the Workshop Panel as soon as they're ready."
Trolls are made available through the Portal.

9+ Workshop slabs but has not researched Bridge
"You will have to find a way to cross the river of molten lava that bars your way."

Bridge
"Clever research has given your Imps the engineering skill to build Bridges. You will need Bridges to cross some of the more hazardous underworld terrain."

9+ Workshop slabs and researched Bridge
"When your troops are sufficient in number and have had some training, lead them north and crush any who oppose you."

Troll
"A Troll has joined you. Skilled in the craft of manufacturing, trolls are best employed doing dark deeds in your Workshop. They don't complain about the hours, because their labours keep them away from combat."

Call to Arms
"You have researched the Call to Arms spell. The first time you cast it, your creatures gather around a banner created by the spell. Cast it again in a target area. Call to Arms only costs gold when it's targetted beyond your territory."

Wooden Door
"Your Workshop has created a Wooden Door. Placed in a corridor, it restricts access to the enemy. Your creatures may pass freely. Lock or unlock Doors by clicking over them with the left mouse button."

Poison Gas Trap
"Your Workshop has produced a Poison Gas trap. Position it and, when an intruder sets it off, it will envelop the area in deadly vapours."

Player enters vicinity of White Dungeon Heart
"The enemy's Dungeon Heart throbs before you. Assemble your minions nearby and administer the coup de grace."

White Dungeon Heart destroyed
"With the enemy Dungeon Heart in ruins, you have trounced the once proud opposition. Rule your new domain with terror and loathing, for a laugh."

There are a number of odd rules in effect for this map. 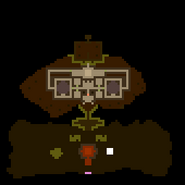 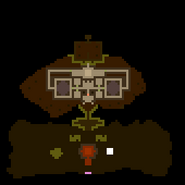 Keeper FX Changes
Add a photo to this gallery

Retrieved from "https://dungeonkeeper.fandom.com/wiki/Flowerhat?oldid=14257"
Community content is available under CC-BY-SA unless otherwise noted.