The Library is a research room that attracts

Warlocks, who enjoy researching in it. Other creatures can also be placed in the Library to research. Warlocks at level 2 and over and

Wizards at level 3 and over will shoot

Fireballs at non-researchers who enter the Library for any reason, most of the time

Imps. When something has been researched, the researchers will cheer to the accompaniment of magical fireworks. If your Library is sold or destroyed, some spells will disappear and will have to be researched again. Room advances are permanent. You can see the progress or a researched spell by clicking on the “?” Icon (the Information Panel) on the far left of your on screen menu.

The table below lists your dungeon assets in the order they can be researched. Most campaign and skirmish levels have the basics (the first eight topics on the list) already researched. Campaign levels also have some items disabled entirely.

Some creatures are natural researchers, with powerful intellects and/or otherworldly knowledge, and some aren't. Research is particularly serious business for

Warlocks; when they have obtained a ranged spell (Warlocks at experience level 2 and Wizards from the very start), they will attack "unworthy researchers" hanging around inside the library— any creature for whom Library work is not a primary or secondary job— and get annoyed.

Warlocks and the more expensive

Dragon will often enter the dungeon and begin researching as soon as the basic rooms are up. Acquiring other sorts of creatures for the task usually requires a great deal of effort and preexisting research.

For much of the original campaign, a level 10

Vampire can be Transferred. On some levels it is possible to transfer a trained-up level 10

Wizard— with his combination of high research value and killing power, he can be as formidable overall as the

Vampire, and he works for one-sixth the payday (apparently the joy of blazing through your research topics and perforating enemies pays for itself).

The Library is your dungeon’s research centre, where new spells can be discovered and known ones upgraded. It is a furnished room, and can accommodate one researcher per bookcase or shelf/podium, plus one. A functioning Library attracts Warlocks. Other evil creatures who will research are the Vampire, Dark Angel and Maiden; on the heroes’ side, the Fairy, Monk and Wizard are also keen scholars.

In the campaign, on levels where a new spell becomes available, it must first be researched. Once this is done, a spellbook will appear above the central bookshelves in your Library. These spells will subsequently be available at the start of each new level. At the beginning of a new level, all your known spells start at grade 1 and can be researched to grade 2 (upgraded).

In Skirmish Mode and Multiplayer, the Library is used to upgrade known spells. It is possible to research a spell by claiming a Library that contains the spellbook for it. Researched spells can be lost if the Library or library bookcase where it is stored is claimed, destroyed or sold. 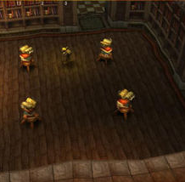 Retrieved from "https://dungeonkeeper.fandom.com/wiki/Library?oldid=15500"
Community content is available under CC-BY-SA unless otherwise noted.