Lushmeadow-on-Down is the 5th level in Dungeon Keeper. It is the final tutorial level.

This is the first realm with an enemy Keeper. Lushmeadow trains the player in the art of competing with rivals for gold seams, creatures, and territory. The goal of the match is to destroy the Blue Dungeon Heart.

New toys introduced in Lushmeadow-on-Down include

Sight of Evil, the

Prison and, technically, the ability to raise up

This realm is led by Duke Martin.[1] Despite this, neither he nor the Heroes have any presence in the level.

Portal - one for each Keeper

Prison - center of map, in river of Lava

Prison lies in the middle of a fiery river running end-to-end through the map's equator. The

Spiders there (all Level 2) will join the first Keeper to bring a creature within sight of them. The Prison itself can be claimed once a

Bridge is laid to it.

If Red claims the Bile Demon, he gets access to the 3 extra ones in the Creature Pool. If he claims the Prison, he gains the ability to lay down additional Prison slabs. But if the enemy Blue Keeper claims these things, the same thing does not happen for him.

While mining along the river, one should make a point of grabbing the Dungeon Specials, which float in their own tiny Neutral Dungeons at either end of the map.

The first emotion felt by anyone entering this level is disappointment at the lack of Gem Seams, which were readily-available in the previous realm, Flowerhat. The distribution of Gold Seams for both Keepers, on their respective northern and southern halves of the map, is somewhat in Blue's favor but nothing to panic about. 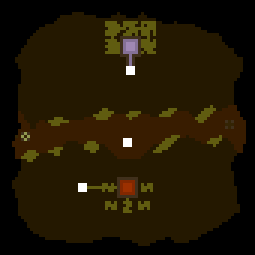 Red can get access to better creatures and hardware. Blue's main asset is probably endurance. Because he does not have much to spend gold on (not even

Speed Monster), he will be financially stable for a very long time.

Blue's location is made clear when that Keeper claims his nearby Portal. Remember: Portals that start out unclaimed (the flashing, seizure-inducing pattern on the overhead map) are uniquely visible to all Keepers and they remain so even after being captured.

After growing to the Creature Limit of 25, Blue usually issues a taunt over the intercom and attacks by laying down bridges across the Lava. Gather your forces with a

Call to Arms, attack his dungeon, beat his creatures into submission, and destroy the enemy Dungeon Heart.

Briefing Text
"Another Keeper controls this underworld realm. His dungeon lies to the north. If you are to entice creatures to work for you instead of him, you will have to build a more magnificent dungeon. Get on with it then."

Player obtains a Spider
"A Spider has joined your dungeon. They are natural enemies of Flies, so endeavour to keep them apart. Overcoming such obstacles will temper your mettle - whatever that means."

Player takes control of a Prison
"You have claimed a Prison. Select imprison from the Information Panel and your creatures subdue their foe, at which point your imps drag the bodies off to a cell. Prisoners who die of starvation may rise again as Skeleton warriors for you to command."

Player researches Sight of Evil
"Your loyal researchers have perfected the Sight of Evil spell. Cast it on an unexplored area and it will be revealed to you for a moment."

Player researches the Guard Post
"Your dedicated librarians have designed a Guard Post. Place a Guard Post in a strategically important area and assign creatures to occupy it by dropping them there."

Player defeats Blue Keeper
"You have slain your rival. His defeat is a testimony to your clever dungeon design. You have the makings of a Dungeon Keeper worthy of the name." 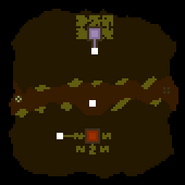 Retrieved from "https://dungeonkeeper.fandom.com/wiki/Lushmeadow-on-Down?oldid=15352"
Community content is available under CC-BY-SA unless otherwise noted.