The Maiden (also known as the Maiden of the Nest) is a recruitable Creature in Dungeon Keeper 2, added into the game with the 1.7 Patch.

This terrifying creature is a monstrous mixture of woman and arachnid; her upper half looks like a comely human female, while her lower half is that of an oversized spider.

The Maiden, although not hugely strong, strikes incredible fear into almost all enemies with her attacks. She also enjoys researching in the Library if it hasn't all been done already. Otherwise, she will hang out in the Casino and gamble away her wages. Unlike most creatures, she seems to have no particular antipathies.

In battle she should optimally be hanging back with the Bile Demons, her mid-range spells provide useful support and if people do break through your Blitzers, she will give them pause for thought with her frightening appearance. 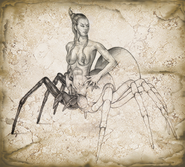 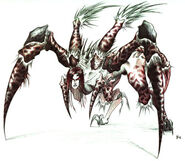 Dark Maiden Concept Art
Add a photo to this gallery

Retrieved from "https://dungeonkeeper.fandom.com/wiki/Maiden?oldid=15318"
Community content is available under CC-BY-SA unless otherwise noted.