Mirthshire is the 17th level in Dungeon Keeper.

Mirthshire is a Tower Defense map. You must thwart incoming adventurers seeking battle and treasure. These parties are said to have "moved quickly to mobilise their forces against you" and do indeed start tunneling in just before the first Payday elapses.

The objective is to kill or capture a certain Level 6 Lord of the Land (Earl Russ[1]) leading the final party.

Claim the two portals, lay down some good-sized rooms, and train the first 8 Creatures that call. It's a cinch. Numerous as the Heroes are, their levels are rather low for this late stage, and a well-drilled death squad can waste their silly little parties.

This is not the only approach and certainly not the most inventive. Getting rid of the Knight that spawns at ~29 minutes is the necessary and sufficient condition for winning the map, and it does not matter how it is done.

It is possible to wall-in the south portal and, with foreknowledge of exactly where to tunnel, the far west-side Gem Seam, and remain completely safe and insulated. This grants you freedom from the limits imposed by the Heroes' timed ingress; i.e., the Dungeon you want, when you want it. There is also unclaimed dirt around the north Portal. An Imp can be dropped out there to tunnel around; could be useful since

Sight of Evil is unavailable here.

To summarize: there are just a few heroes already on the board (Wanderers section, below). Over the course of a half-hour some 70 more Heroes come in, as parties, through various Hero Gates (Groups section, below). They are led by

Tunneller dwarves. The timers are unconditional. The exact schedule is given in the Events section below.

3 - 1950 gold.
A party of lowly thieves that gets generated repeatedly, from a different Hero Gate each time.

Wind spell that will blow friends and foes everywhere. This party appears twice.

5 - 2650 gold
A party of brutes, led by the customary level 1 Tunneller mercenary that seems to spawn with every group.

3 - 3850 gold
Witless anchorites that are lugging their tithe boxes down here for some reason.

5 - 6250 gold
A tough group of Barbarians loosely attached to the Lord of the Land. The Tunneller is powered-up, too.

Navigating Missile, these Priestesses are far more dangerous than the earlier ones.

5 - 5950 gold
The Lord of the Land and his party seem, like the other opponents in Mirthshire, somewhat under-leveled.

This map runs a steady, timed release of the hostile parties listed above, all through Hero Gates. Note that they don't enter in the order of their "NUMBER." 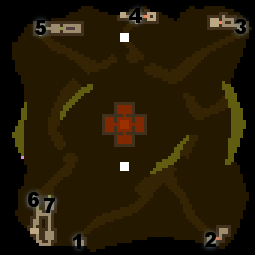 Briefing Message
"Your location is already known to the heroes of this land. They have moved quickly to mobilise their forces against you. It's pathetic. They deserve to have their heads impaled on lances for such impudence."

Turn 9000, Message
"The heroes of this realm possess treasures of great power. Obviously, these should belong to you. I'm certain you will settle the matter of their ownership in your own way."

Turn 15,500
Party "ONE" disembarks at Gate 5 and heads for Baggage Claim

As in Tulipscent, this realm is dotted with small, White-owned fortifications that can be explored and looted.

An extremely rare Multiply Creatures special is in a big cavern just to the west, past the Gold Vein, along with six

The Northeast and Southwest Dungeons have

Boulder Traps. Northeast has a small

Treasure Room with 10,000 gold. Southwest has a

Poison Gas Trap apiece, and with the

Fairies fluttering around a pool behind the door, one might have thought they meant this dangerous little area to hold the Hidden World. Instead, the Hidden World is in a room far to the south, quite obvious to see, and unguarded. All that's here is a Make Safe.

Retrieved from "https://dungeonkeeper.fandom.com/wiki/Mirthshire?oldid=15350"
Community content is available under CC-BY-SA unless otherwise noted.