Mistle is the 19th level in Dungeon Keeper.

The defining feature of Mistle is a cool-looking ancient dungeon you get to claim for your own at the beginning. It can be surmised from the game files that its previous occupants held themselves in defiance of Wisel, the local Blue Keeper. The reason for their downfall, however, becomes obvious in moments: they had no

The bottom-east exit of the newly-claimed Red Dungeon leads to a series of caverns containing mid-level foes. Red Keeper alone has access to this area. Because the creature pool for the player is very limited, and it is impossible to train creatures in any case, we are meant to work our way through this area first and capture all the creatures, heroes, and loot therein, building the strength needed against the White Dungeon to the north. The heroes should not be left in

Skeletons as this would only benefit the enemy Keeper as he would immediately scavenge them.

In order of appearance:

Gem Seam - 4 slabs with 4 open faces, located at the end

Boulder Trap - with the Gems

The White Dungeon should not be attempted with just the first couple of slobs that come in through the Portal. The army of well-trained soldiers in place near the

Training Rooms are the chief threat in this region.

Archers in this group might lure attackers towards the White Heart, causing the Lord of the Land and his

Samurai warriors to crash in and join the fray.

There is a tunnel of water between the Red and White dungeons. Should the fighting get too hot, remember the old trick of throwing down a

Guard Post slab against the water, making the bank too steep to traverse.

9 - carrying 1500 gold
The Lord of the Land's personal "party" spawns in company with two copies of "P4", if a creature gets close to the White Dungeon Heart.

Wizards. They seek the

6 - 4500 gold
Two copies of this party appear simultaneously, one in each of the rooms closest to the White Dungeon Heart, to aid the Lord of the Land.

Defeating the Blue Keeper is the only objective for this level. He is far away and has practically no drive to attack Red. If he is walled into his section of the map, he can't attack. He can defend himself handily, however.

The Blue Keeper starts with a claimed Portal,

Skeletons, trains them furiously to Level 10, and tasks them with Scavenging, possibly Manufacturing, and the defense of the dungeon. To accomplish this, he needs but to dip lightly into his cash reserve of 800,000 gold (he is said to have been well-entrenched in this realm).

A weakness of Wisel's gigantic gold reserve is that it typically removes an AI Keeper's incentive to dig out Gold Seams. He might well ignore the 5 Gem slabs, with a whopping 14 open faces, located north of his domain, leaving it up for grabs.

It is possible to completely wall off the Blue Keeper right at the start of the game. Simply possess your highest level Imp, break through the door and defeat the Fairy. Then proceed to dig near the enemy Keepers Dungeon while at the same time reinforcing the ground. Then simply dig around his dungeon in a tight rectangle and once you reach the unbreakable wall, cancel the possession and pick up all of your Imps and drop them one by one on each wall to reinforce the "cage", while also summoning as many Imps as you can afford to quicken this process before the enemy Keeper starts expanding and breaks into your tunnel.

Once the Blue Keeper is fully walled off, you can complete the level at your own relaxed pace, while having access to 2 Gem Seams in total. With 800,000 gold the Blue Keeper will still prove to be a strong and annoying opponent, due to the constant Scavenging he performs, however being cut off from his only Gem Seam he will run short of gold once you've cleared the rest of the regular Dungeon and the White Dungeon, making the final fight against him a tiny bit easier and less of a grind.

Carefully build up a side of converted Heroes by pushing East and then North from your domain. With the

Training Room completing your kit here, Red Dungeon can be as strong as it could be anywhere. Against a defensive Keeper with a

Skeleton obsession, the battle is then yours to lose.

Other inventive ways of clearing the map exist. It is possible, for instance, to completely remove Blue's army by beating him in a scavenging battle for

Skeletons. There are also judicious ways to employ the

Boulder Traps found at the end of the southeast gauntlet. With the handy

Guard Post trick, a tunnel can be constructed drawing the Heroes into a full-scale conflict with Blue.

Horned Reapers. Every creature that enters through red's portal is, after all, an ingredient for this summon. The more, the merrier.

This level seems to script more background mechanics than levels ordinarily do; many of the events seem redundant with Dungeon Keeper's default rules & behavior.

Briefing Text
"The people of this realm speak of a Dungeon Keeper called Wisel, who is bound to get in your way. When he does, you will have to consign him to history. This will be no mean feat. Resources are scarce because of his activities."

Player digs out the Dirt tile east of Red domain
"It is rumoured that two Dragons are held captive somewhere east of here. Were you to find them and free them, they would make powerful servants."

Player enters the chamber in far bottom-right corner
"These Boulder Traps are ideal for crushing the foe but there are only three of them at your disposal, so use them wisely."

Player digs out the Dirt tile north of Red domain
"This region of the underworld is riddled with tunnels and many heroes explore their labyrinthine ways. No-one said being evil would be easy."

Player passes watery tunnel towards White Dungeon
"A tunnel to the north leads to the Lord of the Realm's domain. This gate is guarded well. It might be wise to direct the humans' attention towards your subterranean enemy."

Player acquires a Samurai
"Your evil has corrupted a Samurai Warrior, he has forsaken honour to join your cause. Should your minions suffer heavy casualties, this Warrior will even call upon his brothers in arms to offer assistance. How kind. How stupid!"

Blue Dungeon Heart destroyed
"Wisel is defeated. The land is yours to plunder and despoil for all eternity. Give 'em hell, master." 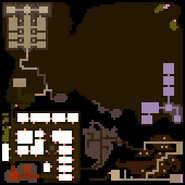 Mistle in a prototype. It looks like Blaise End
Add a photo to this gallery

Retrieved from "https://dungeonkeeper.fandom.com/wiki/Mistle?oldid=14352"
Community content is available under CC-BY-SA unless otherwise noted.