Moonbrush Wood is the 9th level in Dungeon Keeper.

Set in a distinctive, pleasant snowy environment, Moonbrush Wood has no rival Keepers, just a clutch of powerful heroes to assault at your own pace. They patrol isolated sections of a fortress to the north of your Dungeon Heart. There are some new classes among these high-level opponents, namely,

Your goal here is to defeat four

Wizards and the Lord of the Land (Sir Robbo[1]).

The heroes reside in a large, square stronghold north of your domain. It contains some peculiarly-shaped gold seams. There is a Library in each corner of this position, occupied by a benevolent Wizard and his companions. Slaying or capturing all four wizards triggers an attack by the Lord of the Land, from the center point of the fortress.

Below is a complete list of your enemies here. Strictly speaking these groups are not parties, just heroes wandering around, but each is essentially an isolated team and may be fought separately.

Our situation here is rather calm and prosperous. The heroes' position is separated from us by a moat of lava. There is plenty of gold to mine, one gem face set in the east end of our region, and another, less-useful one at the very end of the maze dungeon. The player technically has unlimited time to build up and the opportunity to draw a small ongoing income, a luxury not enjoyed since Flowerhat. Exactly as in that realm, digging greedily for gold north of your Heart is likely to draw fire from

The entrance to the maze lies in the southwest corner of the realm. The maze dungeon offers a backdoor to the heroes, but on the way there is a branch leading to the Transfer Creature special. Another branch leads to some rooms with gold pots and a Boulder Trap (look out for your Imps).

Moonbrush Wood is probably meant to showcase the fighting abilities of some of the higher-level, higher-end Hero classes, and train Keepers for facing some of the more desperate fights that will break out in later realms. Use it as a chance to evaluate the speed and efficiency of your dungeon-building habits, and your ability to command your minions to battle. The map allows for many playstyles so experimentation can be encouraged here.

One Dungeon Special in this realm provides a link to Secret 2. It is secured in a small room at the far north end. Set in the bedrock, the room's location is made clear by the overhead map. The tiles immediately outside its door have multiple Poison Gas Traps. When the door is destroyed, a Boulder Trap is triggered. Lightning Traps cover every claimable tile within. As this area contains no other treasure, you need not bother with it until after you have won the level, whereupon you can set to dismantling this place in peace and quiet.

Graveyard becomes available for research on this level. Other new arrivals are the Keeper Spells

Disease, though neither of them are likely to prove very useful here. This is also the first level in which the player's

Demon Spawns can Grow Up into

Briefing Text
"This realm is ruled by four arrogant Wizards who think they've got everything under control, because their feeble magical power impresses the locals. But you're not from these parts..."
Horned Reaper
"Behold, you have summoned a Horned Reaper. Try not make it angry. You'll fail, because everything makes a Horned Reaper angry but at least try to make sure that everything near it is an enemy creature when it finally goes ballistic."
Graveyard
"You have researched the Graveyard. Your Imps will drag corpses here to rot... And possibly to rise again as Vampires, ready to do your bidding. That's style."
Disease
"Your researchers have concocted a Disease spell. Cast it on enemy creatures and watch the affliction spread like the plague."
Vampire
"A Vampire has risen from your Graveyard, nourished by the souls of the dead which have been brought here. You have to suck up to Vampires or they go off in a huff, but they're extremely powerful and fearsome underlings to have in your employ."
Iron Door
"You have manufactured an Iron Door. It's a formidable barrier. Use it well."
Player defeats the Lord of the Land
"Well, you're done down here. Time to introduce yourself to the locals and re-organise their nice little lives." 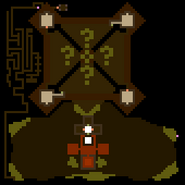 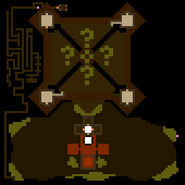 "Maze Dungeon" detail
Add a photo to this gallery

Retrieved from "https://dungeonkeeper.fandom.com/wiki/Moonbrush_Wood?oldid=15345"
Community content is available under CC-BY-SA unless otherwise noted.