Nevergrim is the tenth level in Dungeon Keeper.

Nevergrim is a memorable piece of underworld topography. Open lava and spacious, snowy landmasses dominate the region, and the only solid walls in the entire level are those surrounding the two Dungeon Hearts.

The openness seems to clarify matters for the usually-benighted Blue Keeper, for this opponent is likely to connect to your territory and launch an invasion as soon as he can.

The ruler of Nevergrim is Lord Healey,[1] but he and his stalwarts are mysteriously absent from this level.

Portal - one for each keeper

With its excellent candidate pool and great wealth, the previous realm usually allows players the opportunity to Transfer a top-tier minion into this realm and stomp the Blue Keeper with ill grace.

Reloaded and played-out as intended, though, Nevergrim may catch people by surprise.

There is an onus on Red to shift gears and work as fast as possible here. The main objectives should be to get a large and efficient

Training Room going, train a mixed force of whatever creatures come through the portal, and then to secure the two Increase Level specials at opposite ends of the map's equator.

The Blue Keeper here runs the most aggressive/pragmatic AI, and what's more, there are no particularly weak creatures to attract that hog up his training space. This Keeper is likely to field a force equal in strength to Red unless the player does everything he does, but better.

A number of formal introductions are made here: the

Demon Spawn past level 10) and

Hound (who actually first appeared as a neutral in Tickle). There are some new Workshop products made available: the

Magic Door, which should all prove to be entirely useless in this wide-open region.

Briefing Text
"Elsewhere in this fiery realm you have a rival Keeper to contend with. I advise extreme antisocial behaviour on your part."
Scavenger Room
"Your tireless librarians have researched the Scavenger Room. Creatures placed within a Scavenger Room will lure their kin from other dungeons and the outside world, into your domain."
Cave-In
"With typical brilliance, you have researched the Cave-In spell. Use it to block off passages and repair dungeon breaches. Interestingly, the rockfall will crush to death any creatures caught beneath it."
Dragon
"Your great wealth has bought the loyalty of a passing Dragon. They are fickle creatures. Keep your eye on this one."
Hellhound
"A Hell Hound has been lured to your domain by your Scavenger Room."
Boulder Trap
"You have a manufactured a Boulder Trap. Place it in a corridor and howl deliriously as it rumbles inexorably towards unwary trespassers."
(But where are the corridors?)

Player defeats Blue Keeper
"Notch up another victory, most malicious one. You have another land to add to your dismal collection." 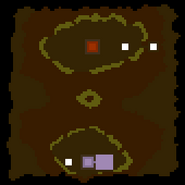 Raw revealed map
Add a photo to this gallery

Retrieved from "https://dungeonkeeper.fandom.com/wiki/Nevergrim?oldid=13615"
Community content is available under CC-BY-SA unless otherwise noted.