This article is about the Secret 1 of the original game. In KeeperFX, an improved version of this level appears as Secret 5, and the original Secret 5 was renamed to Secret 1.

Briefing Text
"Powerful magic permeating through the rock from the realm above prevents a dungeon from being constructed here. You will have to conquer this realm another way."

This hidden world departs from Dungeon Keeper's emphasis on real-time strategy, taking the player into first-person shooter mode through

Here we have an arduous journey through a massive Hero Dungeon. The level shows no clear evidence of play-testing by the game's developers and effectively has no reward for completion. Without the ability to make

Imps or claim territory, you cannot actually use the absurdly heavily-guarded Increase Level Special located in one end of the dungeon, and there is no Transfer Creature Special at all (despite the promise of a Level 10

Vampire and, presumably, some means of getting him to the next realm in your campaign).

If wading through Lava and Poison Gas, dodging

Boulder Traps, and clashing against massed Hero groups while your possessed minions slowly starve to death is reward enough, then let the fun begin.

There are two possible conditions for winning the level: killing all opposition, or reaching the center of the Gem Seam cluster at the end.

A timer begins by counting down from 38,333 at a rate of exactly one point per two Turns. It takes about 70 minutes to run down and allows for a deliberate pace.

This party spawns in the lava as you approach the guard stations bordering the lava passage (probably a design flaw— one of many on this level— intended to be a trigger point for additional spawns).

These archers spawn in the same context as above.
Another copy of this party ambushes the player when he enters a "safe" room in the boulder maze area. The location is distinguished by the room's symmetry and a single water tile in the exact center.

This difficult party enters through a Hero Gate in the large, watery room on the way to the Increase Level Special as the player approaches, and patrols the area.

This vastly-overpowered party enters through a Hero Gate close along the approach to the Increase Level Special. Whether or not it mobilizes to attack the player's dungeon heart is unclear (it depends on whether a monk or fairy becomes leader).

This first stretch is just a warm-up exercise, literally in the Lava. Possess the Level 5

Dragon and use its skills to make your way into the Hero Dungeon. As you navigate, several outlying guard groups consisting of

Mountain Dwarves will attempt to pressure you down from their positions. In first-person mode the Dragon has access to rapid-fire dragon

Giant hold the main entry to the Heroes' domain. They should be disposed of.

Inside the Hero Dungeon, you will reach a

Bile Demon who joins your side. This is a suitable minion for the sealed corridors immediately ahead. They are stocked with

Many bashed doors later, you will reach a second

Mistress instantly joins your side and starts duking it out with her jailors. From here out, the realm gets very difficult. The halls beyond this Prison contain a series of very dangerous

Boulder Traps, and the dungeon twists in such a manner as is likely to disorient you; meanwhile, the Boulders will keep winding their way around in complicated loops. A few low-level cretins guard the region. Enemies are here mainly to distract you— assess tiles for safety and don't let them drive you into the path of a Boulder.

The Mistress is much faster than the Bile Demon and should therefore be possessed to maximize your chances of outrunning angry boulders.

The image below shows the layout for this section of the dungeon in greater detail. The central, squarish room with Boulder traps running along its sides has an

Archer ambush in the middle, around a water tile). The final stretch, a random jumble of tunnels with

Thieves, can be overcome by dashing directly through the center and veering left before running into the last Boulder head-on. Boulders will be triggered, but when you reach the point marked by the green arrow, you are safe.

When the Mistress engages a pair of Level 4

Samurai (the final room pictured above), the Boulder gauntlet and in fact most of the environmental hazards of this realm are now behind, but the Hero opposition is going to be far more dangerous. Using the last of the Mistress's strength following this encounter, you will break into a third

Vampire held there is likely to

Teleport to the Dungeon Heart to establish his

Lair. If he does, you will just have to bring him back to this point.

Ultimately you need to proceed east from the prison to complete the level; however, if you want to win by vanquishing every single Hero, you should make your way west first, towards the useless Increase Level Special.

Bashing doors west from the Vampire's Prison, the first two rooms along this route contain

Samurai and a Level 5

Wizard has just entered the gate and will make every effort to stay together. You can try to draw party members off, but failing that, dodge the Wizard's spells while backpedaling and swiping at the Samurai as they chase you. Leaning on

Heal, a ferocious Vampire can bring this group down with attrition. Samurai do not heal.

When you bash the

Lightning mages— this group can vaporize your minion in seconds, and will head for your Dungeon Heart if they do so. To prevent that, arrange for melee assaults at or around corners, forcing them to draw close and reduce their ability to use their Lightning spells.

On approach to the Special, an extraordinarily dangerous battlegroup (three Level 8

Fairies) pours in through a Hero Gate in an adjacent room. Try, yet again, to avoid getting stomped and force encounters to be close and around corners. Don't forget crowd-control with

The path to conquering this realm begins by bashing the door leading east from the Vampire's Prison. The way turns south through a long series of very heavily-guarded chambers. First, a Level 5

Giant joins your side. Stay in possession of the Vampire, but attempt to interest the giant in the battles in the next rooms.

A cramped space beyond some

Behind the Iron Door, another army of defenders awaits. Of particular concern in this area are the

Fairies. The problem with the hordes of Fairies in Secret 1 is that they cast

Lightning and fly; if you have to retreat, they will head en masse for your Dungeon Heart. The

Dragon, who should have made his way back to the

Lair, can be useful in dealing with them. Camp out beside the heart as they approach it through the long corridor, and spam

Grenades down the corridor, blowing them to bits.

Past this area, there are several rooms with

Archers. They are in way over their heads. Make sure to visit all of them if you are intent on 100% clearance.

The final room is assuredly hallowed ground, where no Bullfrog Productions employee has ever set foot, because there is a hopeless battle with nine Level 7

Monks. Monks heal, so they can't be brought down by attrition, and they seem highly reluctant to be peeled off from their herd. Do your best to take on individual Monks, in melee if you have the opportunity, kite through their Slow spells, and hit them with your own.

Another option lies with the

Boulder Trap in the room just before them. If you are fast and somewhat lucky you can entice the Boulder to patrol this room, instead of rolling out into the watery room prior. You could kill many Monks at once by drawing them into its path.

On finally reaching the Gems at the end, having overcome ridiculous odds and received a fresh new Level 10

Vampire with which you can do absolutely nothing, you now have the opportunity to relax and reflect on the value of Quality Assurance in the production of software. 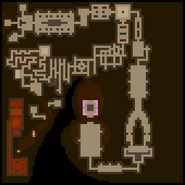 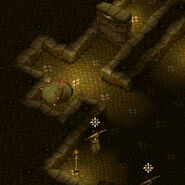 Boulder Boss
Add a photo to this gallery

Retrieved from "https://dungeonkeeper.fandom.com/wiki/Secret_1?oldid=15375"
Community content is available under CC-BY-SA unless otherwise noted.