Secret 5 is a bonus level Bullfrog forgot to introduce, supposedly having the Dungeon Special encountered in level 18 (Blaise End). This level is documented in the official guide book,[1] so it clearly wasn't meant to be scrapped.

It has been included in KeeperFX, to be encountered on level 8 (Tickle). The player takes control of a low level

Demon Spawn and has to traverse a white dungeon to a Transfer Creature special at the end, when victorious. It has been altered slightly, so that there are enough Increase Level specials to eventually become a mighty

Therefore, this level now serves to teach the player that Demon Spawn can grow up. Like in the original game, the level immediately following Tickle, Level 9 (Moonbrush Wood) is the first level where Demon Spawn are allowed to grow beyond level 10, and the first chance for players to encounter Dragons.

The main premise in this level is that you are not allowed to lose any of your creatures. The only creatures you get are a Level 10

Imp as well as a Level 1

Since your Imp can't replenish his health by going to the

Lair you have to look out for his health. When your Demon Spawn runs out of health simply drop him in the Lair.

First of all, you need your Demon Spawn to destroy the door in the room with the huge lava pit and the 8

This is best done, by dropping it right in front of the door and then possessing it. Now drop your Imp at the door and let it claim the small room with the three Level-Up-Specials. Watch out, because sometimes the Imp has his own mind and starts running back to your Dungeon Heart etc. It is possible to take some damage from the Archers, but as long as you didn't lose too much it is okay.

Use the three specials right away to Level Up your Demon Spawn.

Now you open the only other door and destroy the door beyond with your Spawn. Behind that door are 2

Samurai. Possess your Demon and kill them by firing your

Destroy the next door and let your Imp claim the territory with the Level-Up-Special. Use it. Drop your Imp back at the Gems and let him mine a little.

Possess your Demon Spawn and kill the 2 Samurai and the Archer from far away. Be sure to kill the Archer first, since the Samurai can't reach you due to the Lava pit between you. Watch out for the

Boulder Trap which is set directly next to the Lava pit.

Let your Imp claim the all the land to the Lava Pit without getting killed by the Boulder Trap.

Possess your Spawn again and destroy the 2 doors on the other side oft he pit. As soon as you destroy one of the doors you should get the

Bridge as an new room to build. Build one over the Lava Pit and let your Imp claim the

Hatchery as well as the Level-Up-Special right next to it. He won’t get attacked by the enemies around so don’t worry. Drop him back at the Gems.

Now comes the hard part, so you better save. Drop your Demon Spawn at the Hatchery and possess it. There is a huge cave in front of you with doors on both sides. Ignore all the enemies and run across the hallway with the tombstones without touching them (

Word of Power Traps!!!) as well as avoid getting crushed by the 3 Boulder Traps at the other side of the cave. When you reach the other side there‘s a little maze. On the left hand side are 2 Boulder Traps as well as one red tile on the floor. You can activate one Boulder Trap without getting crushed pretty easy, but the second requires a little micro-management. Save. Drop your Spawn on the single red tile and as soon as he walks down and activates the trap quickly pick him up. You might need 2 or 3 tries.

When both traps are set off drop your Imp in the maze and let him clam it for you. Be sure he didn’t get crushed by the still rolling Boulders. Drop him back at the Gems.

Barbarians as well as a lot of Level-Up-Specials. The Barbarians can easily be killed by shooting

Missile and strafing backwards with your Demon Spawn in the little maze. Behind the other door is a little

Prison with an single imprisoned Imp. You can claim the Prison and free the Imp or just move on since he isn’t really required to beat the level.

Use your Demon Spawn to kill the 8 Archers in the huge Lava Pit room.

Claim the Barbarian room with the power ups and level your Spawn up to Level 10. Drop your Level 10 Imp and the Level 10 Spawn at the

Magic Door and let them destroy it. As soon as it is destroyed drop your Imp and Spawn back at your base and use the remaining Level-Up-Specials to get a Level 10

Dragon (hooray!!). Behind the Magic Door is an long hallway with an Level 9

Knight. Drop your Dragon in the Barbarian room and possess it. Fight the Knight. This should be easy with the

Flame Breath spell as well as the

Heal spell of the Dragon.

Let your Imp claim the long hallway and find an Transfer-Creature-Special at its end. Do not use it yet, since your Dragon will disappear and you will lose the level.

Use your Dragon to kill the remaining enemies in the

Word of Power Trap room. Use your Transfer Creature to transfer your Dragon and hit Spacebar. 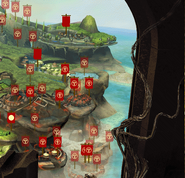 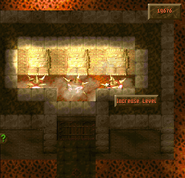 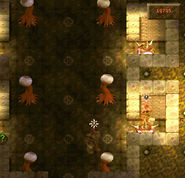 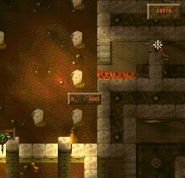 Add a photo to this gallery

Retrieved from "https://dungeonkeeper.fandom.com/wiki/Secret_5?oldid=13890"
Community content is available under CC-BY-SA unless otherwise noted.