Skybird Trill is the 20th and final level in Dungeon Keeper.

Here we have a showdown with the

Avatar, a boss-grade Hero with many loyal retainers at his beck. Their fortress squats in the center and appears to be abandoned for the time being. This is the doing of some other Keeper in the region who wants to eat your lunch, but attacking him is optional.

After being crunched for so many levels, it is good to once again be in command of ample resources and powerful creatures.

This section summarizes the likely phases for this final match, considering the scripted events and how all the participants behave.

Briefing Text
"This realm is begging to be plunged into darkness. The Avatar himself has a castle here. Another Keeper also seeks his soul. This could get messy."

A large watery expanse, essentially a castle moat, lies to the north of Red's domain. When breached, hostile Level 10

Tentacles in the area attack. This moat and castle are vulnerable to the Blue Keeper from the north side of the map. The money is all to the east, anyway; only dig north after making some preparations.

Although the Blue Keeper can lay down

Magic Doors separating his domain from the White region, so his creatures will never open them.

Nevertheless, Blue's creatures might attack and eventually claim the Avatar's fortress without any apparent effort on the Keeper's part. The threat is linked to circumstances described below, and amounts to plain bad luck.

The most problematic event is if the Blue Keeper carves out any rooms that breach the water. If that happens, his creatures can bypass his locked doors. If there is a breach, a few things will draw his creatures out:

Avatar's fortress is tricked-out with rooms, Hero Gates and invisible Hero entry points, doors, and traps. But there is virtually no garrison.

Once the White Heart is destroyed, all White-owned tiles on the map go to Dirt. All traps formerly deployed on White tiles (and there are oodles of them in the castle) are instantly deleted. Also, the Blue Keeper receives an extra Level 10

Vampire for free, out of nowhere.

Text when White Dungeon is destroyed
"You have destroyed the Avatar's castle but your rival has already taken the Avatar prisoner. Be that as it may, only the Keeper with the blackest heart can destroy this legendary hero, so ransack your rival's dungeon and take the prize."

Given the message that pops up when the White Dungeon collapses, the game clearly wants the player to attack the Blue Keeper right then and there. But not only is fighting Blue unnecessary, it just makes so much more sense to use the back tunnel and capture the

Avatar, the boss Hero, first. He is pacing around on his own private island, surrounded by lava. He is not actually imprisoned, merely stranded in this spot.

To make this a capture, he must be accessible to

Imps. Possess a creature and use

Word of Power to push the

Avatar off his little island and into the back tunnel.

Avatar is either slain or converted, a message states that he has been revived by his lieutenants. Everybody will be down here in force shortly. This invasion is the main battle in Skybird Trill- the big climax. Waves of the following Hero Parties are generated from many locations as part of this event.

Text when White has no Avatar
"The Avatar has been resurrected by loyal lieutenants in hiding. But their act has revealed them to us, here in this realm. Now the Avatar rallies all those who would stand against you. It's time you gave this self-righteous oaf a proper kicking, master."

A timer starts as soon as the above message appears.

Turn 0
Player is granted the ability to construct

Turn 1000
Eight parties are added to the level at this moment.

In particular, parties of Heroes will continue dumping themselves into that mysterious far corridor, the one that's been sitting there quietly since the beginning just beside the Dungeon Heart:

In the retail version of Dungeon Keeper, the Blue Keeper can be left untouched. Evidently he spends his days counting his 2.5 million gold and poses no strategic threat. In Dungeon Keeper FX, defeating Blue is mandatory, but can still be put off until after the Heroes.

Guard Post slabs bordering the water, on the side-by-side North exits of the

Avatar's castle, to lock Blue out of it.

The main strength for Red here is in

Bile Demons, which are suddenly very numerous in the Creature Pool and can stack enormous area-of-effect damage with their

Dragons, which will be responsible for Research and can tank admirably in battle.

Orcs can also be attracted after due research, and their fighting abilities make them preferable to

Vampires in the Creature Pool, plus two Level 10s on the field for Blue, could be well-worth the effort. It is possible to raise a Level 1

Vampire, protect it with the

Vampires from the enemy dungeon and the creature pool. Scavenging directly from the pool requires being under the Creature Limit (25) — but surely anyone would consider tossing stuff back through the portal if it meant replacing them with

Bile Demons but not the

Mistress. Only Blue has those. It is therefore impossible to create

Mistle does not have a Transfer Creature, but the

Priestess can be transferred in from the Secret realms. Each of them has some unique uses here.

Avatar has the same Strength as a

Horned Reaper, a superior hit and block rate, 1.5 times as much health, almost twice as much armor (damage reduction), and a large spell repertoire. He is immune to

Boulder Traps. He is a mountain of combat ability and certainly a lot of fun if captured and brought to bear against the Blue Keeper, who really doesn't know what to do when this thing is wreaking havoc in his dungeon.

Bile Demons are useful for wearing him down, but the unusual spell damage they produce cannot stun creatures. It is recommended to capture the

Priestess and the two

Horned Reapers that can be acquired earlier.

By the end, it's possible to get three

Avatars in your employ. The first two sign on under a sufficient amount of torture, before and after the Heroes' invasion. Another, extra-secret copy is possible by setting the dungeon's attack stance to Imprison and knocking the

Avatar unconscious while he is in your service (which is very tricky) and using the Resurrect Creature special.

It is possible to slow the flood of heroes attacking. Of the three hero gates along the bottom edge of the map, the left and center ones can be walled off, even separated from each other. However, the right one cannot be walled off without the ability to build

Bridges. While difficult and probably not worth it, this can be done by capturing a

Bridge built by the Blue Keeper. Several of the other hero parties can be greatly slowed down by choking the corridors they must traverse with doors.

There are two known prototypes of this level in two Dungeon Keeper prototypes. In both prototypes, the level number is 22:

The 9 May 1997 version has numerous other differences to the final:

In KeeperFX, defeating Blue (even before defeating the

Avatar) grants you the ability to build 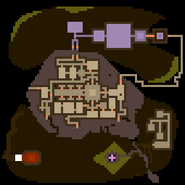 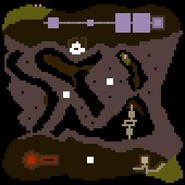 Skybird Trill in a prototype. It is a completely different level 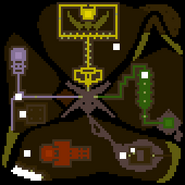 Another version of Skybird Trill in another prototype.
Add a photo to this gallery

Retrieved from "https://dungeonkeeper.fandom.com/wiki/Skybird_Trill?oldid=15520"
Community content is available under CC-BY-SA unless otherwise noted.