Sleepiburgh is the 14th level in Dungeon Keeper. The dark corridors of Sleepiburgh are contested by two allied local Keepers and a cadre of Heroes. The player's sole objective is to kill or capture the Lord of the Land (Thane Seamus[1]). The briefing text advises that only he and his companions stand against the Red Keeper here, but the Portals elsewhere on the map immediately give lie to that. Still, the green and blue dungeons seem to exist only to complicate matters.

There are severe restrictions on Red's available creatures and hardware; nevertheless, it is possible to wall the foes off and work through the difficulties in a calm setting.

The heroes occupy a small temple-complex at the center north end of the realm. The Lord of the Land appears through a Hero Gate in their sealed chamber when all the Wizards have been slain or converted. When he meets his fate (even at the hand of the enemy Keepers!) the map is won.

Unlike Buffy Oak, Red has a lower creature limit than Blue and Green this time. The player initially has access only to

Warlocks, whereas these rivals have access to ample quantities of

Bile Demons, and both of which can flatten Warlocks. A

Barracks can be researched and built, but it won't draw any

Even if the neutral Workshop is captured and the

Mistress start coming in through the portal, there are no Bile Demons for the Red side to complete the

The Keepers are a serious threat if the player challenges them for the gold seams during the period when they are attracting these superior creatures and training them. With Gems present, there is no real reason to do this. Blue is running a more expansionist AI than Green, and may penetrate neglected spots in Red's walls.

Briefing Text
"Only the Lord of this Land stands between you and hectares of desolation and woe. I bet you can't wait to meet him."

Player researches Chicken
"You can't swing a cat for Dungeon Keepers fighting over the destiny of this region. It should fall to you to settle the disagreement once and for all."

Player researches Destroy Walls
"So, now you have a spell that turns fortified walls to dust. It's expensive to cast and it's also possible that your enemies possess the same magic power. This could still turn out to be one of those days."

Lord of the Land defeated
"Your continued success makes me sick. Thank you, your wickedness." 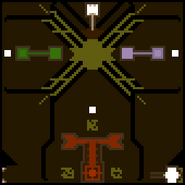 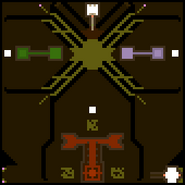 Troll's Workshop
Add a photo to this gallery

Retrieved from "https://dungeonkeeper.fandom.com/wiki/Sleepiburgh?oldid=14536"
Community content is available under CC-BY-SA unless otherwise noted.