Snuggledell is the 6th level in Dungeon Keeper, and the first non-tutorial level in the campaign.

There is a Blue Keeper to the south, and the objective on this level is to destroy Blue's Dungeon Heart.

Snuggledell is run by Squire Tristan,[1] though he makes no appearance in the level.

Portal - one for each Keeper

The Blue Keeper builds 4x4 rooms and, with a lower creature limit and no access to the Bile Demon, is handicapped relative to Red (the player) in terms of the forces he can field. Nevertheless, he is slightly faster and more aggressive than the enemy in Lushmeadow-on-Down, and can research

Lightning Strike. Try to avoid connecting territories with him, as he will surely attempt to claim your bridges and territory, and be wary of investing a lot in creatures with low hitpoint scores.

After building his rooms and mining out the nearby gold seams, Blue will usually issue a taunt, tunnel north from his territory, and lay down bridges in search of more gold and possibly a confrontation.

Training Room than he does and filling it with the best creatures available, while he mucks around with

Flies and limited training space. When the time is right, throw a

Call to Arms and storm the place.

Lightning Trap, and the Keeper Spell

Lightning Strike. But most notably, there is a

Torture Chamber. The region's centrally-located Chamber must be claimed in order for the room to be activated here, and three Mistresses will immediately join the side that reaches it first.

Briefing Text
"It's time to mete out the ultimate punishment to a keeper who dares to challenge you for this corner of your subterranean empire. The price of failure shall be oblivion."

Player obtains a Dark Mistress
"You have finally constructed a dungeon impressive enough to attract a Dark Mistress. You must discipline these wicked wenches frequently. They respond particularly well to a good slapping."

Player takes control of a Torture Chamber
"You have claimed a Torture Room. Place captive heroes and creatures into this chamber of horrors to convert them in your supremely evil way. Alternatively, place your own creatures within the room whenever disciplinary measures become necessary."

Player constructs a Braced Door
"Your manufacturers have created a Braced Door. If security matters, you can be sure when you buy a Braced Door. You couldn't be certain with only a curtain and a hole in the wall is no help at all."

Player constructs a Lightning Trap
"You have manufactured a powerful Lightning Trap. Try it out. It's bound to give someone a shock."

Player researches the Keeper Lightning
"Your researchers have devised a spell that unleashes the energy of a thunderstorm on the target of your choice. Select the spell, aim at a hostile creature and flash-fry him with a Lightning Strike."

Player defeats Blue Keeper
"How satisfying it is to see an enemy Keeper's dungeon crumble and his power dissipate. There'll be no controversy over this year's hall of infamy nomination." 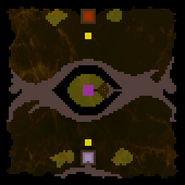 Typical Blue dungeon in Snuggledell.
Add a photo to this gallery

Retrieved from "https://dungeonkeeper.fandom.com/wiki/Snuggledell?oldid=14478"
Community content is available under CC-BY-SA unless otherwise noted.