Tickle is the 8th level in Dungeon Keeper.

A great fiery river winds its way through this region and separates the factions. As indicated by the picture, some of the gold seams are natural crossings, so acting greedy is both hazardous and rewarding. A party led by the Lord of the Land (Thane Dennis[1]) is supposed to visit when the Blue Keeper and all rogue Heroes are slain, but he doesn't. Your mission here is simply to destroy all opposition.

These Fairies represent a most unusual trap, certainly designed to punish players who dig around willy-nilly without using the

Sight of Evil spell. They are waiting in ambush behind a gold seam that's taking a suggestive path north of your heart. Unlike a similar group of renegade Fairies seen earlier in Realm 6, these are powered-up with lightning spells and are hovering in safety over lava, making them fatally dangerous to Imps and any low-level creatures you might have attracted so far.

Occupying a lava-bright cavern north of the fairies, this group is a stand-up fight. Likely a programmer's mistake, the seventh Barbarian seems to be exactly your kind of scum— he is a Neutral— and will instantly join the first Keeper to see him and attack his comrades. Back him up!

These three unpartied heroes are supposed to make a grand entrance when all other opponents have been slain or captured, but in the shipped game, no location for them has been designated. Instead, you win the match.

The primary source of opposition in Tickle, the Blue Keeper here has a very generous amount of gold slabs in his immediate area. And still he may try to hog the small, center-south seam connecting Red (us) to his own island. This is noteworthy because if both keepers reach it, battle might commence early on. Other than superior geography this keeper is more-or-less evenly matched to Red, with similar initial endowments, research, and construction options.

An ancient structure is located in the northeast corner. At its north end, you have a choice of three Magic Doors. The center one contains the location of one of the hidden realms, Secret 1.

Temple with its accompanying host of applications. The

Iron Door and the Keeper Spells

Conceal Monster may also be developed.

In constructing a Temple and attracting the right minions, we have access to

Horned Reapers for the first time in the campaign (no suggestion of their existence and recipe is made to the player until the next level, however). The AI in the original release of Dungeon Keeper never sacrifices creatures, so Blue will not field these monsters, but since he can build 5x5 rooms, he is the first keeper that will compete with the player for the scarce Bile Demons in the Creature Pool.

Briefing Text
"Seek out the one who would be your rival in this region of the underworld. Explain the concept of early retirement to him. On the other hand, string him up. It's in the only language he understands."
Player researches Conceal
"You have researched the power of Invisibility. Cast it on a creature to hide it from enemy eyes."
Player researches Protect
"The Protect Creature spell has been researched at last. Cast it on a creature to increase its toughness."
Player researches Temple
"Researchers have found instructions for building a Temple to the dark gods. Sacrifice creatures in the Temple's pool to receive gifts from these gods. You might have to experiment with the offerings you make. The dark gods are not easy to please."
Player defeats Heroes and Blue Keeper
"That's another enemy successfully written off. The defenceless inhabitants of the land above bow down before your depraved presence. As if that will save them..." 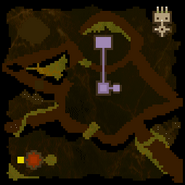 Hidden Realm Box, in a forgotten dungeon northeast of your enemy.
Add a photo to this gallery

Retrieved from "https://dungeonkeeper.fandom.com/wiki/Tickle?oldid=14274"
Community content is available under CC-BY-SA unless otherwise noted.