Start a Wiki
"Torment", located in Omelas, is the seventh and final My Pet Dungeon level that comes with Dungeon Keeper 2, and the only one that appears in the "Other" category, rather than being on the regular MPD menu. It contains three Portals, two Mana Vaults, three Gem Seams, and 11 magical items.

How to proceed in the beginning is fairly straightforward. There is only one direction to go until you get Wooden Bridges, so go south and claim the two Mistresses and the Receive Imps special. Build the normal complement of rooms in this southern area. When Wooden Bridges become available, unlock the doors east and west of your Dungeon Heart and send your Mistresses to break down the doors of the Prison areas and take out the Fear Traps. You can then send any Fighters you may have to break down the Wooden Doors of the Prisons themselves. Don't forget to pick up the imprisoned creatures after you claim them!

After that, keep digging out spaces for rooms and mining gold. You will run into a few traps, and may lose some imps if you're not watching them, but by this time you should have some creatures trained up to level 3 or 4, and they can take out the traps. The Salamander is in a lava area in the northwest, between two Portals, and the Dark Angel is in another Prison to the far northeast, guarded by a couple of Sentry Traps. Annoyingly, claiming these two creatures will not be enough to bring you to 25000 points, so keep claiming and building, and kill some Heroes if you've a mind to. 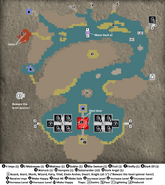 Detailed map
Add a photo to this gallery

Retrieved from "https://dungeonkeeper.fandom.com/wiki/Torment?oldid=12794"
Community content is available under CC-BY-SA unless otherwise noted.