ID Text
"Select a creature to take with you to the next realm."

This powerful special allows you to choose one of your creatures and take it with you to the next level.

Transferring a level 10 creature onto a new map certainly does not make things more difficult, and could be considered a crutch. This is not to say it isn't entertaining, though, and it can add new dimensions to the game. Nevergrim and Tulipscent are particularly notable for being able to be beaten very quickly by transferring a

Horned Reaper from the previous realm and possessing it.

If you lose the next realm and must restart, you will not keep the creature. A good time to save the game is right at the end of the previous realm, before activating the Transfer, giving you a quick choice of transfers from that dungeon.

A Transfer special exists in most of the original Dungeon Keeper campaign levels: level 4 (Flowerhat), levels 6 (Snuggledell) all the way to 16 (Tulipscent), and Secret realms 2, 3, 4, and 5 (but not 1, making the earned creature there useless and the level pointless). Below is a list of possibilities for each level.

Transfer Specials are often well-hidden or secured in a heavily-trapped area. Certain minions are, themselves, very hard to acquire.

To give a few examples, to transfer a

Knight from Flowerhat (Realm 4) you would have to steal a

Thief hero and train him so hard that he grows into one. Similarly to get a

Dragon on Snuggledell (Level 6), you have to pray that the computer attracts and trains a

Demon Spawn past level 10, and then you have to capture it. Realm 9, Moonbrush Wood, has the only

Samurai in the first three-quarters of the game. If for some reason you insist on bringing a

Mountain Dwarf into level 16 (Tulipscent), he would have to be transferred all the way from Wishvale, level 7.

The final levels of the game have no transfer boxes, but you can still visit the Secret Realms in between. The

Vampire are obviously useful, but the

Priestess from the newly-found Secret 4, with her extremely dangerous kit of spells, may be even better at dealing with some of the hopeless odds in these stages. 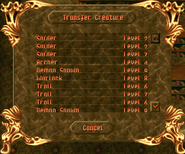 Retrieved from "https://dungeonkeeper.fandom.com/wiki/Transfer_Creature?oldid=15376"
Community content is available under CC-BY-SA unless otherwise noted.