Trolls excel at manufacturing items in the

Workshop. If a Workshop is available, they will head there by default. Trolls are the best creatures for manufacturing; the only creatures that come close (although they are still inferior) are

Mountain Dwarves. On the other hand, Trolls cannot conduct research, although they are passably good scavengers.

Trolls are not the best fighters, but they can still hold their own if trained to a high enough level. Training them can be beneficial for their manufacturing, too, as they learn

The Dungeon Keeper Demo level refers to Trolls as goblins and claims that they are 'excellent soldiers'.

The Troll is a weak figure. Even the Goblin is stronger than him. But his strength is not in battle, but more in his ability to manufacture. He is the fastest creature to manufacture, and will create traps and doors at lightning speeds. A few of them can arm your whole dungeon with traps and doors to keep heroes out for a long time.

"A Troll arrives, attracted by the splendour of your Workshop. His crafting skills are set to serve you well as one who toil will make both traps and doors for you to use in your defence." 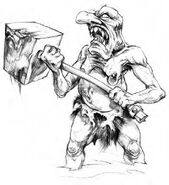 Ingame animation of a Troll

This article is a stub. You can help Dungeon Keeper Wiki by expanding it.
Retrieved from "https://dungeonkeeper.fandom.com/wiki/Troll?oldid=15951"
Community content is available under CC-BY-SA unless otherwise noted.