Tulipscent is the 16th level in Dungeon Keeper.

The player is connected to a Blue Keeper by a long corridor, and the objective of this map is simply to destroy the Blue Dungeon Heart. Strange initial appointments, a lopsided creature pool, and attacks by parties of high-level adventurers can make the level awkward. Tulipscent has many interesting Hero encounters and rewards, but there is little time to go exploring before Blue gets belligerent.

Must Obey spell is made available for the first time, at this late stage.

Earl Simon rules Tulipscent,[1] but is missing from this level (he is apparently 'many leagues afar'[1]). This is the final level without a Lord of the Land.

Lightning Trap - northwest Hero Dungeon; will start zapping at the Heroes in this area

8 - northwest Hero dungeon, getting wrecked by the aforementioned Trap

The main group to worry about is "ELITE", a strong party of adventurers led by a Tunneller, that will steamroll the Keepers unless some kind of countermeasure is taken.

9
This group will be generated up to three times as the Red and Blue sides reach certain benchmarks. The first occasion is when Red completes research on

Conceal Monster, and the next two triggers are when Red owns 17 creatures, and when Blue owns 17 creatures. The party that spawns on Blue's event will in fact target the Blue dungeon. The spawn point is a 3x3 gap in the center-west dirt. The group carries 10,500 gold.

7
This group drops in on the player's initial approach to the Resurrect Creature box, east side of the map, in a room that already has four

5
This group warps in through a nearby Hero Gate when the player approaches the Gem Seam in the southwest Hero dungeon. Each member carries 800 gold. A copy of the next party, "THREE", might also pass through the gate 1500 turns (~80 seconds) after this one.

6
This group appears if the player approaches the Multiply Creatures special in the northwest Hero dungeon and attacks any foes it encounters. Each member carries 1000 gold.

5
This party enters through a Hero Gate to the south of the neutral Portal, when Red approaches that end of the chamber. The Wizards each have 1200 gold.

2
This party enters through a Hero Gate to the east of the neutral Portal, when the player approaches that end of the chamber. The party carries 2900 gold.

6
This party enters through a Hero Gate to the west of the neutral Portal, when the player approaches that end of the chamber. Whenever they don't see anything to attack, they head for the nearest

4
This party enters through a Hero Gate to the north of the neutral Portal. North is usually the player's direction of approach to this chamber, so be aware that they might pop up behind you. Each member carries 1200 gold.

This is regarded as the trickiest level in the original campaign. This section will attempt to cover some points of interest to fulfilling the objective: destroying the Blue Dungeon Heart. All the side-activities and fluff on this level suggest a long adventure was intended. Unfortunately, Blue Keeper usually sounds the alarm and attacks after just a few minutes. An easy way to beat the level is to transfer a level 10

Vampire or something of equivalent level or strength from the previous level, possess it, and destroy the Dungeon Heart with it. Just ignore the attacking creatures, the

Vampire can soak their damage. It's possible that you need more than one go. It may feel like cheating, but it's possible.

Bile Demons in the Creature Pool, can be attracted at the beginning. It's advisable to lay down some extra

Hatchery slabs immediately to draw them in. The

Horned Reapers as they train. They will get seriously irate, but can't do a thing about it. They should also be kept on

Speed Monster. They learn their own copy of the spell at Level 5, and they don't need to train further from there.

Skeletons are a most unusual entry in the Creature Pool. The full review of creatures available to Red Keeper, and their rooms demanded:

Research is so pitifully slow with the single Level 1

Warlock, and so severely punished by the map script, that the more advanced creatures might be too hard to get and not have a chance to pay off before Blue attacks.

There is a single open Gem face available, so lay a

Imps to Level 3. Sell the Reapers' private suites and make an efficient

Training Room, or at least take the gold out of those little

Treasure Rooms, because this gold was not actually in your treasury. It is possible, though not crucial, to breach the long gold vein running through the top-left side and secure the Multiply Creatures special while keeping the "ELITE" party walled-off.

Boulder Trap guarding the entrance to Red Dungeon, and your counterattack will just be a mop-up. Blue induces his minions to destroy your

Magic Doors with a

Call to Arms. If you detect the

Call to Arms, you might be able to keep the Blue creatures moving along in a tight pack by selling the doors, readying them for a good pasting with the Boulder.

At least one copy of the marauding Hero party "ELITE", whose triggers are listed in the Groups section above, is likely to spawn early. People playing this map without a care for this party risk getting breached and rocked. The easiest course of action is to keep the dungeon fortified and ignore them. It is also possible, if difficult, to lure them to the Blue dungeon and let them complete your mission for you. Note that the presence of this party on the map sends Blue Keeper into a tunneling frenzy (likely his CHECK_FOR_NEUTRAL_PLACES command).

Briefing Text
"You will not find any easy path through this region. You will have to fight hard to gain any advantage. But, if you intend to rule the world, you've simply got to get through days like this." 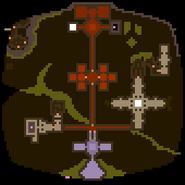 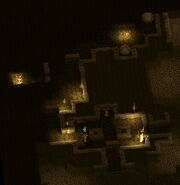 Retrieved from "https://dungeonkeeper.fandom.com/wiki/Tulipscent?oldid=14604"
Community content is available under CC-BY-SA unless otherwise noted.