Waterdream Warm is the third level in Dungeon Keeper.

As in the first two levels, here the Keeper plays defense against invading heroes. There are more of them, and they all come in through a White Dungeon that can be captured and looted.

This level introduces the player to the

Warlock. There is scarcely any new stuff to research in Waterdream Warm (only

Speed Monster), but from this point on, the more advanced Rooms and Spells will usually have to be developed in the Library.

The realm's leader is Baron Anthony.[1]

Initially there are no enemies, and the White Dungeon in the southwest is vacant. The player will trigger the release of Heroes in one of two ways. The typical way is when a Warlock enters the player's service. A hidden timer starts ticking; after 3750 turns the player is urged to train a Warlock, and after 5000 turns, heroes appear.

The alternative way is if the player tunnels up into the White Dungeon through the south and gets 10 or more creatures. Either way, the "Thief" and "Dwarf" parties below enter through the Hero Gate and begin tunneling around.

The white dungeon's walls are fortified except for a single breach-able tile in the south, and the approach through the southern tunnel passes over water, so it is normally impossible to capture the place. However, the

Tunnellers that spawn in the Hero Gate are likely to chew through the walls of their own dungeon in their excitement to make a direct tunnel to Red.

2000 turns after those guys are slain, the following heroes will come in through the Hero Gate with the Lord of The Land among them.

Briefing text
"Build a dungeon with a Treasure Room, a Lair, a Hatchery and a Training Room. Make sure they're all big enough. Cramped conditions do nothing for the morale of your minions."

Player owns an Entrance and at least 9 tiles each of Treasure, Lair, Hatchery, and Training
"The time has come to build a Library. Libraries are where new devices, room designs and magic spells are researched. Make a Library at least as big as the other rooms. Researchers like quiet too, so try to build your Library off the side of a corridor."
The Library is made available for construction. If more than 12,000 turns have elapsed for the level, the tile requirements for this event are removed.

Player has laid at least 1 Library slab
"Your new Library will attract creatures like Warlocks, who are interested in researching magic and dungeon designs. These evil mages are real bookworms, as well as being magically proficient themselves."

Player has 9+ Library slabs
"That's a fine collection of parchments and tomes you've assembled. Most creatures can engage in research but Warlocks make the best and keenest researchers. Stupid Trolls have trouble holding books the right way up and sometimes even chew the pages."
All creatures but Warlocks temporarily disabled at Portal.

Player attracts a Warlock
"The scent of arcane knowledge has lured a greedy Warlock into your dungeon. Don't forget to train your Warlocks occasionally. Their spell casting abilities make them fine long range fighters."
All creatures re-enabled at Portal.

First wave of Heroes defeated
"The first wave of attackers lie hacked to pieces on the floor and give your domain that lived in feeling but it surely won't be long before their kin launch another assault."

Alternative text if White Dungeon was approached from south
"All is quiet again. Use this time to ready yourself for the next attacks. The enemy is only regrouping. It is not yet defeated."

Second wave of Heroes defeated (victory)
"You meet with success yet again, Keeper. All those corpses will keep your Hatchery's topsoil fertile. They also serve as warnings to other foolhardy adventurers, of course." 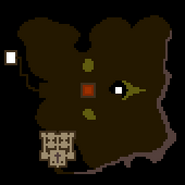 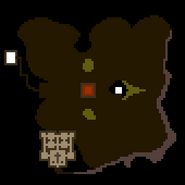 Keeper FX Changes
Add a photo to this gallery

Retrieved from "https://dungeonkeeper.fandom.com/wiki/Waterdream_Warm?oldid=13608"
Community content is available under CC-BY-SA unless otherwise noted.