Wishvale is the 7th level in Dungeon Keeper.

This level features an ongoing battle between the Heroes of the realm and a Blue Keeper. The briefing text touts Red as a third-party opportunist and encourages the player to wrest control of the map from the survivor. A helpful ring of Lava and Impenetrable Rock protects you and your Gold Seams from early assault. Bridging the lava causes the heroes to perceive a path to your dungeon.

The mission objectives are to destroy Blue's Dungeon Heart and either kill or capture the Lord of the Land (Lady Catherine[1]), and both need to be fulfilled.

Orc, the first of his kind in the official campaign, joins the player's side at the portal (though not through the portal) when the player has attracted five minions.

Under certain conditions, Hero Parties start pouring into the region, and a protracted battle will commence, with either Red or Blue as the target. These parties may only join the fray during the first 20,000 turns (~18 minutes) of the match. Additionally, there must be five or fewer Heroes currently on the prowl.

This means that several of the Level 1 heroes wandering the corridors need to be slain for the war parties to arrive. The parties respawn, so the earlier they are set in motion and the faster they are eliminated, the more heroes might actually turn up on the map. In theory, as many as 73 Heroes (

Skeleton Army!) can pour in through the gates before the time limit hits. In practice one might plan for around half this number.

All in all if you play this map normally, quickly attracting creatures, laying down a

Bridge, and battling it out with anything that ventures close, you will see your share of action against Heroes. A bridge leading straight into the

Training Room is a fine strategy here, and a steady income, since the partied heroes drop gold when slain.

However, cowardly players can arrange matters so that only the Lord of the Land's team, "KNIGHT", makes an appearance, after the wandering heroes are slain. This is simple: turtle up in your island, and don't kill any heroes, for a long time. Clever players might instead consider tunneling out a passable route from the neutral tunnels to the Blue Dungeon and force that Keeper to sustain the full force of the Heroes' assault.

Level 2
This party appears, and reappears, every 2000 turns (~110 seconds) at the North Gate for the first 20,000 turns of the match, whenever there are 5 or fewer Heroes in play. It attacks the nearest accessible Keeper (remember your Lava moat?) and may stop by his Treasure Room to make a withdrawal.

Level 2
This party respawns every 4000 turns (<4 minutes) at the Center Gate under the same conditions as above. It attacks the nearest accessible Keeper.

Level 2
This party respawns every 7500 turns (~7 minutes) at the South Gate under the same conditions as above. It attacks the nearest accessible Keeper.

Level 2
This party spawns every 10,000 turns (~9 minutes) at the Center Gate under the same conditions as above, so it is unlikely to show up more than once, if that. It attacks the nearest accessible Keeper.

Level 2
This party spawns every 15,000 turns (~14 minutes) at the North Gate under the same conditions as above, so it will show up only once, if that. It attacks the nearest accessible Keeper.

Level 4
Triggered when there are exactly zero Heroes present on the level, and only after the 20,000-turn timer has run down, this is the only party that spawns without fail, and defeating the Knight is one of the two necessary conditions for winning this map. It appears at the Center Gate and attacks the nearest accessible Keeper.

The heroes' base in this region is a three-pronged affair with enough loot to interest a brave player. The North and South entrances each have a Hero gate, a stash of 4500 gold, and a Dungeon Special (Increase Level N, Resurrect S).

The Central area is dangerous; there are two

Lightning Traps set along the path through the room, and Imps are drawn to these things like magnets. When the area is accessible but unclaimed, they forsake other jobs in favor of bashing the

Iron Doors guarding this room, seemingly in hopes of being liquidated en masse by the traps. This area holds the Center Gate, another Resurrect Creature, and a great horde of 30,000 gold.

The Blue Keeper here is a bit of a creampuff with a small Training Room and a tendency to run a limited operation on 4x4 rooms. His primary AI settings may or may not interfere with the developers' desired commands that he periodically check for nearby gold, tunnels, and points of cautious attack (in that order).

Basically this keeper is more likely to wall himself off than attack either the player or the heroes, and the player is encouraged to capture the Blue Dungeon in a reasonable time frame, if only to guard against such an eventuality. Defeating Blue is one of the two necessary conditions for winning this map.

Nevertheless, Blue has a wealthier situation than Red, and what he fails to spend in his small

Lightning Strikes when you attack. If you attract lots of strong minions and aim too high in training them, you will run out of money and may have to resort to a "workshop economy" to cover paydays and spells.

Barracks and the tough, reliable

Orc. A new class of opposing hero, the

Wizard, is likely to make an appearance.

Briefing Text
"It appears you have arrived in the middle of a raging battle. Perhaps it would be wise to stay out of the way until you are strong enough to eliminate both sides."

Orc arrives and joins the player
"An Orc warlord joins you and brings with him the plans for building a Barracks. In this room you can form creatures into teams."

Knight arrives
"I think I hear the clanking of plate armour. Yes, the Lord of the Land has finally roused himself from the fireside to find out where all his loyal servants have gone."

All heroes vanquished, and Blue Keeper is still alive
"You have turned local heroes into something of an endangered species, now make the enemy Dungeon Keeper extinct."

Player defeats Blue Keeper and the Lord of the Land
"You have prevailed, Keeper. The bodies of your enemies litter the most forlorn alcoves of your domain, in tribute to their futile efforts to keep you at bay." 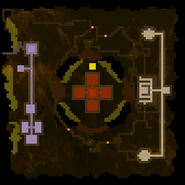 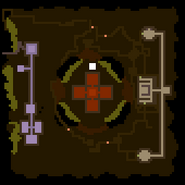 Keeper FX
Add a photo to this gallery

Retrieved from "https://dungeonkeeper.fandom.com/wiki/Wishvale?oldid=14275"
Community content is available under CC-BY-SA unless otherwise noted.