Woodly Rhyme is the 15th level in Dungeon Keeper.

This realm hosts a three-Keeper free-for-all. Each contender has a high creature limit and Gems at-hand... the stuff of a protracted battle. Heroes are mounting a defense in the center. Indeed, the first Keeper to stumble out into open water risks getting slaughtered by them.

There are two ways to complete Woodly Rhyme. Either eliminate all Heroes and Keepers in conventional conquest, or cast the

Armageddon spell and let the blood flow over your Dungeon Heart. This is also the first level in which the player can manufacture the

This realm is ruled by Baron Byrne.[1]

(Level 6) - in a prison tucked behind a Gold seam, far east end of map

A subterranean river of sorts runs through this realm. The first hazard of life in Woodly Rhyme is tunneling out into the water too early. It is tempting to redesign Red's cramped rooms and twisting corridors into a large, streamlined workspace, so beware of sneaky, watery inlets during expansion. A

Knight and his two

Samurai guards (all Level 10), are ruthlessly determined to squish the first player to open a valid path from the water to his Dungeon Heart. They will bash down the doors of their own fortress and charge out.

Provided that Red remains cautious, Blue may be the first Keeper to reach the water while hollowing out his basic rooms. Without solid spell research, the Keeper will almost always be destroyed. There are scripted messages for both Blue and Green alerting the player when a rival is running too low on creatures— this situation was obviously anticipated— but the messages were not implemented properly.

Guard Post slab adjacent to water makes the bank too steep for non-flying creatures to travel, severing routes. Useful for covering a mistake or even forcing an early confrontation between the Heroes and one of the other Keepers.

Squatting in the water is a Hero-owned dungeon, an ancient redoubt with "great archeological significance" and the most heavily-trapped place in the entire Dungeon Keeper campaign. Waves of heroes rally to its defense.

(Level 4)
This party appears in the corridor just beyond the unclaimed treasure rooms, in conjunction with party "FOUR". There are two triggers for it in this corridor, so it appears twice. The Archers each carry 500 Gold. The Wizard carries 600.

(Level 4)
These mountain dwarves each carry 800 Gold. They enter the White Dungeon's left-anterior room 500 turns (25-30 seconds) after the human player enters it, and attack.

(Level 6)
This party enters the White Dungeon's right-anterior room 1000 turns (~1 minute) after the human player enters it, and attacks. Each Priestess holds 1800 Gold. Their mission seems to be maximum confusion, since they all have

Wind spells but no spammable attacks.

(Level 5)
This party appears in the corridor just beyond the unclaimed treasure rooms, in conjunction with party "ONE". There are two triggers for it in this corridor, so it appears twice. Each Barbarian holds 900 gold.

The White Dungeon's gold hoard, unclaimed creatures, and one Increase Level special (which requires claiming a tile with five traps on it) are worth capturing at any time. The final rooms seem to be an elaborate warding system of some kind, concealing the location of a hidden realm, Secret 3.

Inner chambers of the White Dungeon 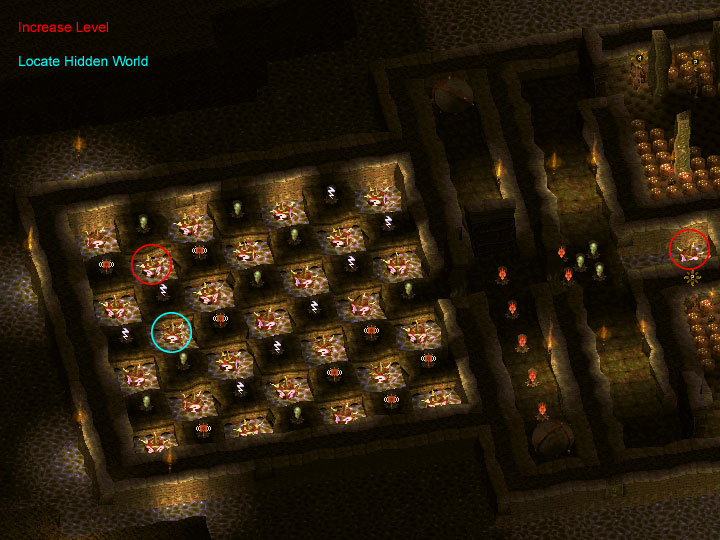 The Red Keeper has access to two open Gem faces. The AI players each have access to four Gem faces, to keep pace. If one of these players were to meet an untimely death by digging out a doorway for questing Heroes, one might consider walking in and assuming control over the Gem seams and Portal.

There is greater variety than Sleepiburgh. The Portals are slow but very steady in this realm, and the creature limit for each Keeper is high (40, 35, 35). Dragons are back for Red,

Trolls are back for the opponents,

Orcs are back for everyone, and unusually, there are 3

Vampires in the creature pool that are attracted by

Once again, there is a conspicuous absence of

Bile Demons. There are none in the creature pool, and exactly 1 on the map, locked far away from any real use. If he dies or is sacrificed, 1

Bile Demon is added to the creature pool... but no players can attract them in this realm. If you transferred a

Bile Demon from Sleepiburgh, he can scavenge the creature pool, though. This would be the only way to form a team of

Horned Reapers, should that be appealing.

Armageddon has arrived. Rather than train a proper invasion force, this spell can be an entirely different approach to the match. Fill an enormous treasure room and press the red button. Blow all the gold reserves with maximum-charged

Lightning Strikes while the opponents are forcibly massed around the Dungeon Heart, and the map is done.

Tucked beyond the deep south-southwest bend in the water, the special is warded by a

Boulder Trap (in that order).

Briefing Text
"You seem to have started a trend. Two other Dungeon Keepers also have designs on this dark domain. Expect no quarter from your rivals."

Blue has at least 10 Creatures and at least 1.5 paydays have elapsed
"Can you see how vulnerable one of your opponents has become? Then kill him."

Green has at least 10 Creatures and at least 2 paydays have elapsed
"I spy a keeper with hardly any creatures left under his control. I spy a Keeper who's about to die."

Player researches Armageddon
"You have developed the Armageddon spell. That's quite a name to live up to. Make sure you're the most powerful force in the region before casting it."

Player researches Destroy Walls
"This ancient dungeon possesses great archaeological significance. This simply means there should be some interesting treasure worth stealing. Now that's what I call practical archaeology." 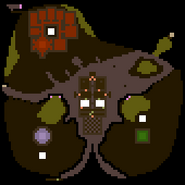 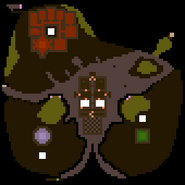 KeeperFX
Add a photo to this gallery

Retrieved from "https://dungeonkeeper.fandom.com/wiki/Woodly_Rhyme?oldid=15346"
Community content is available under CC-BY-SA unless otherwise noted.